This product is available in: CA, MN, NY, ND, WA Unfortunately, we can't ship to PO Boxes and APO addresses.

Size750mL Proof94 (47% ABV)
A true American malt whiskey distilled from Black Butte Porter beer wash and aged for 3 years in new American oak #4 char barrels.
Notify me when this product is back in stock.

This product is available in: CA, MN, NY, ND, WA Unfortunately, we can't ship to PO Boxes and APO addresses. 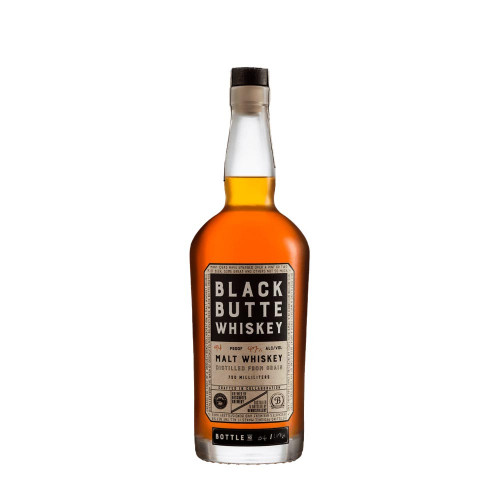 Coming from Oregon, Black Butte Malt Whiskey is the limited-edition fruit of a collaboration between Bendistillery’s Crater Lake Spirits and Deschutes Brewery, both longstanding legends from central Oregon.

Founded in 1996, Bendistillery’s Crater Lake Spirits is one of Oregon’s oldest and largest distilleries that boasts an award-winning portfolio of traditional spirits, including vodka, gin and even a limited-edition reposado tequila, all available in more than 20 states.

Founded by Gary Fish in 1988 as a small brewpub, today, Deschutes Brewery is a prolific brewery that sells more than 225,000 barrels of beer each year in 32 states and several other countries. Adored for its masterfully crafted beers such as Mirror Pond Pale Ale, Inversion IPA, and Black Butte Porter, Deschutes Brewing has garnered many awards.

First launched in 2016, this unique, true American malt whiskey is distilled from a wash of the Deschutes flagship beer– Black Butte Porter – that’s double distilled by Crater Lake Spirits and aged for 3 years in new American oak #4 char barrels. The result is a malty spirit with flavors of chocolate and cherry mingling with woody and earthy oak notes.

Get this unique American malt whiskey!

An enticing nose with rich, chocolate aromas and cherry. The malty palate offers chocolate cherry and roasted hazelnuts. Long finish with malted grain and a touch of smoke and oak.