Size750mL Proof90 (45% ABV)
Aged a minimum of five years, this small-batch rye, which is bottled on Treasure Island, includes up to nine-year-old whiskey that has been extra-matured in Hoffmeister barrels. 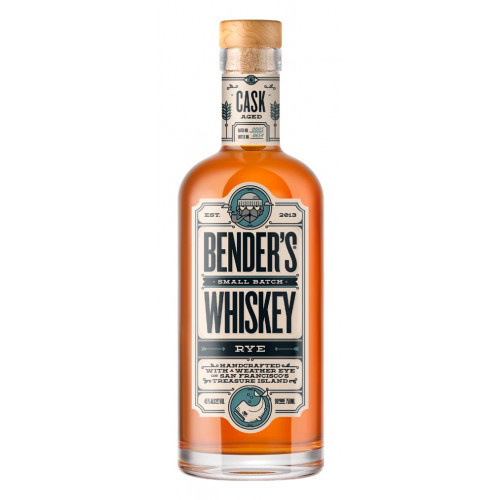 While many modern whiskeys take their names from bourbon aristocrats of the past — Colonel E.H. Taylor, George T. Stagg and W.L. Weller, to name a few — Bender’s Rye Whiskey is made by a real, living man by the name of Carl Bender. Bender, who is an illustrator, designer and self-proclaimed whiskey aficionado, teamed up with his pal Christopher Cohen, who boasts twenty years of experience in the wine and spirits industry along with "superhuman" taste buds, to launch Treasure Island Distillery in 2011.

Located on Treasure Island, the landmass emerging between the Oakland and San Francisco sides of the Bay Bridge, Treasure Island Distillery shares real estate with the navy and an auxiliary air facility. (Treasure Island was also the site of the 1939 World's Fair, and is a California Historical Landmark). While Treasure Island is technically a neighborhood of San Francisco, Bender and Cohen speculate that it’s "more hospitable to spirits than people."

Bender’s Rye Whiskey was crafted in honor of Treasure Island Distillery's first foray into Manhattan, and is blended from five-year-old rye and eight-to-9-year-old corn whiskeys sourced near Alberta, Canada. Some of the whiskeys are aged in year-old Bourbon barrels and Hoffmeister barrels are used for selective additional aging.

As a result, Bender’s Rye has a sweet and spicy character, including hints of vanilla and caramel, which leads to a palate accented by notes of nutmeg, cinnamon and molasses. The finish is long and dry, with notes of raisins and buttered toast.

With the addition of water, the whiskey has notes of toasted bread, woody spices and honeyed nuts. Finish is bold and warming, with notes of spices balanced against a subtle touch of fresh vanilla and cream.