Size750mL Proof80 (40% ABV)
This unique addition to the Basil Hayden lineup substitutes the rye in the mash bill with brown rice. Additionally, a portion of the whiskey goes through a secondary maturation in toasted oak casks.
Notify me when this product is back in stock. 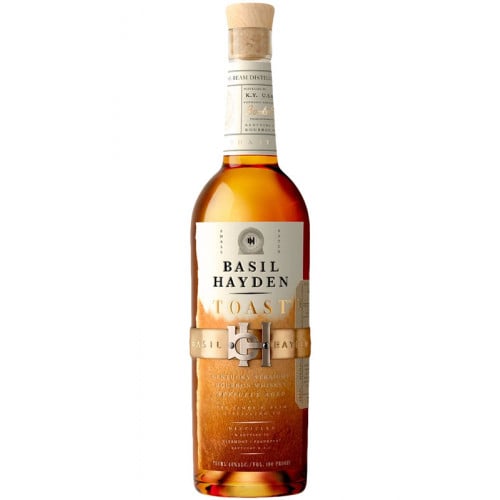 Following the end of the American Revolutionary War, Johannes Reginald Beam emigrated from Germany to the United States and eventually settled in Kentucky County. At the time, Kentucky County was still considered part of Virginia, overseen by a military governor named John J. Bowman. After settling in Kentucky, Beam began harvesting corn and set forth a family tradition by distilling the excess grains he harvested into whiskey. Since then, seven generations of the Beam family have been involved in whiskey production for the eponymous company (the company is actually named after James Beam, who rescued it following Prohibition).

Part of Booker Noe’s Small Batch Bourbon Collection, Basil Hayden’s Kentucky Straight Bourbon Whiskey is named after Basil Hayden Sr., a Maryland Catholic who led twenty-five other Catholic families from Maryland to Nelson County, Kentucky (near Bardstown, home of the Jim Beam) in the late 1700s. In addition to being a religious man — Hayden established the first Catholic church in what is now the Commonwealth of Kentucky — Hayden was also a distiller and a pioneering one at that. While most bourbons at the time were made from a traditional corn base, in 1796 Hayden defied convention by mixing small grains into his mash, believing that the spicy rye flavors would provide a striking complement to the corn’s sweetness. Much to the chagrin of the traditionalist set, Hayden proved to be right.

Basil Hayden Toast was added to the permanent lineup in 2021. It's built with a new mash bill of 63% corn, 27% brown rice, and 10% malted barley. The recipe substitutes brown rice for the commonly used rye, resulting in a softer whiskey with gentler spice notes. After the initial maturation, a portion of the whiskey is transferred into toasted casks for around 2 months, before being blended with the rest of the bourbon. Bottled at 80 proof, it's a subtle, refined, and approachable expression.