Size750mL Proof109.6 (54.8%% ABV)
A more delicate riff on Balcones' flagship Texas Single Malt, the Mirador was aged in refill oak casks. The lighter barrel influence lets the spirit shine through without sacrificing the richness and complexity.
Notify me when this product is back in stock. 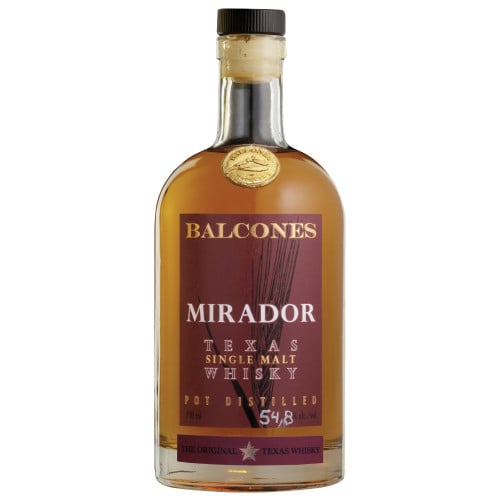 Crafted by Icons of Whisky America 2019's Master Distiller of the Year Jared Himstedt, Balcones Mirador Single Malt channels the richness and complexity of their award-winning flagship Texas Single Malt Whisky into a softer, more delicate dram. It's been aged in refill oak, making the barrel's influence lighter and the overall profile less oaky, letting the spirit shine through in all its glory.

There are green fruit notes on the nose with pear, apple skin, honeysuckle, honey, caramel, and a floral touch. More fruit is on the palate along with herbal green tea notes, honey, and a gentle spice and nuttiness. The sweetness fades into a dry finish with hints of jam, citrus, and black tea.