Size750mL Proof106 (53% ABV)
Distilled from 100% roasted Hopi Blue Corn, this whisky earned a score of 95.5 points from Jim Murray's Whisky Bible.
Notify me when this product is back in stock. 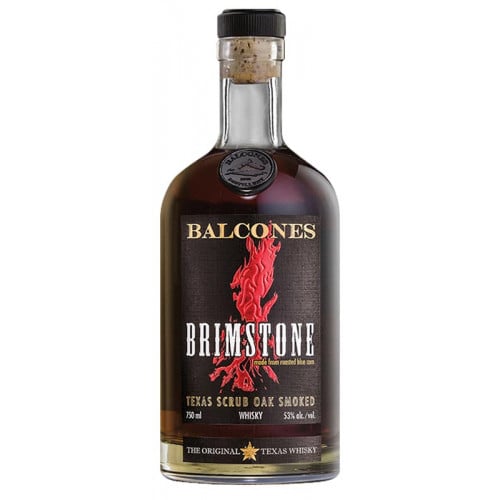 Balcones Brimstone Whisky is crafted exclusively from roasted Hopi blue corn. This unique strain of corn, which is sourced from New Mexico, produces kernels that are full of rich, roasty nuttiness. "I wanted some corn with guts and a really nice flavor," Tate says. "Only the Hopi blue corn had the depth and elegance needed to create something truly exceptional."

Balcones Brimstone is made by mashing and fermenting the corn, and distilling the resulting wash twice through Tate's copper-pot stills. Following distillation, Tate smokes the distillate — the whisky that is produced after distillation but before maturation — with sun-baked Texas scrub oak using a proprietary process that remains a closely-guarded secret. While a number of distilleries smoke grains prior to distilling them — peated Scotch, for instance, is made by smoking barley over a peat flame — Tate smokes the distillate that is produced after the wash passes through the still. The proprietary process results in a whisky that has a unique flavor profile — the Texas scrub oak adds notes of bacon, barbecue and pulled pork to the whisky. The notes of barbecue and brisket are bold but not overpowering. Rather, they complement flavors of chili pepper, brown sugar, cinnamon and graham crackers. After the distillate is smoked, it is aged in lightly charred, American oak barrels before each bottle is filled and labeled by hand. Balcones Brimstone earned a score of 95.5 points from Jim Murray's Whisky Bible and the title "Best in Category" at the American Distilling Institute Competition in 2012.

Notes of bacon, barbecue and pulled pork that are bold but not overpowering. Complemented by notes of chili pepper, brown sugar, cinnamon and graham crackers and lead to a smooth, warming finish.

3.8 out of 5
(3 reviews)
Write a review
Real email address is required to social networks
Sign in
Login with Google
Login with Facebook
Or
We also recommend