Size750mL Proof107 (53.5% ABV)
Aged for seven years and bottled at 107 proof, this bourbon earned a score of 90-95 points from Wine Enthusiast, which called it "superb."
Notify me when this product is back in stock. 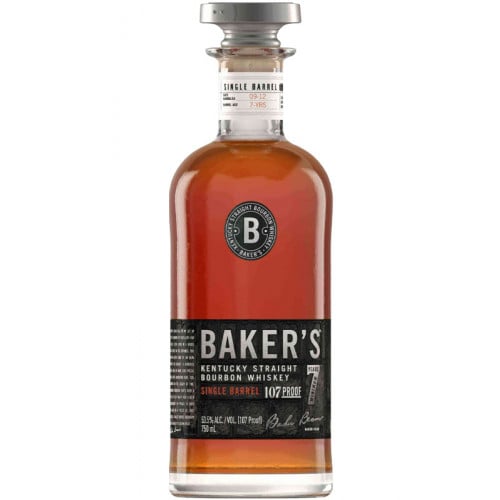 After settling in Kentucky, Beam began harvesting corn and set forth a family tradition by distilling the excess grains he harvested into Whiskey. Since then, seven generations of the Beam family have been involved in Whiskey production for the eponymous company.

Baker's 7 Year Old Kentucky Straight Bourbon Whiskey is named after Baker Beam, the grand nephew of of the legendary Jim Beam. The bourbon is made from a mash dominated by corn and fermented using a special strain of jug yeast that has been in the Beam family for over six decades. Following fermentation, the bourbon is distilled and then matured in new, American oak casks for a minimum of seven years. As a result, the bourbon has an aroma of honeyed fruit, creamy vanilla and caramel. The aroma gives way to notes of roasted nuts, candied fruits, vanilla, toffee and milk chocolate. The finish is rich and lasting, with sweet and spicy flavors mingling with each other.

Pick up a bottle of this superb bourbon today!

Aroma of honeyed fruit, creamy vanilla and caramel. Notes of roasted nuts, candied fruits, vanilla, toffee and milk chocolate. Finish is rich and lasting, with sweet and spicy flavors mingling with each other.