Rating:
73%
(1)
Bacardi Gran Reserva Limitada is a barrel-aged premium limited edition release, combining rums that have been exquisitely aged for up to 16 years.
$109.99
Add to Wish List

Bacardi Limited is the largest privately held, family-owned spirits company in the world. They are renown for their eponymous Bacardi white rum, but their portfolio has an extensive 200 labels. Founded in 1862, Bacardi has been family-owned for seven generations. Bacardi currently sold in more than 150 countries. Headquartered in Hamilton, Bermuda, Bacardi is led by the founder's great-great grandson, Facundo L. Bacardí.

The Bacardi family is the lifeblood of Bacardi Rum. They first began producing Rum in Cuba in 1862. The subsequent years that followed brought revolution, to wild Havana nights during American Prohibition. Emilio Bacardí Moreau refused to support Spanish government, fighting staunchly for the independence of Cuba, and was consequently exiled for his beliefs. When he later returned to Cuba, he became the first freely-elected mayor of Santiago de Cuba.

Cuba in the 1960s was undergoing a revolution, which eventually led to the Bacardi family’s exodus out of Cuba. The members of the family moved to the United States and transplanting their distillery to the beautiful island of Puerto Rico.

Often depicted in red, a color of joy, bats represent “good fortune” in traditional Chinese culture. This is the Bacardi symbol, and it is a reflection of their prosperity. Eventually, they began to rebuild the empire that they had left behind in their Cuban homeland. Bacardi is now in their seventh generation, and they are in constant pursuit of perfection in the art of rum-making.

Bacardi Gran Reserva Limitada is a limited edition barrel aged premium release combining rums that have been exquisitely aged for 16 years. This Gran Reserva is the currently the rarest and most luxurious offering from the House of Bacardi. “Exceptionally old barrel aged rums are blended with younger aged rums to produce a perfectly balanced yet richly flavorful spirit” (producer). Barcardí Gran Reserva Limitada has long luscious notes of caramelized vanilla and roasted almonds.

Light on the nose with hints of brown sugar, vanilla, oak and fruit leathers. The palate has long notes of caramelized vanilla, brown sugar, dried fruits, roasted almonds, cinnamon, and oak, tropical floral notes, caramel, and coffee. The finish is long and smooth. 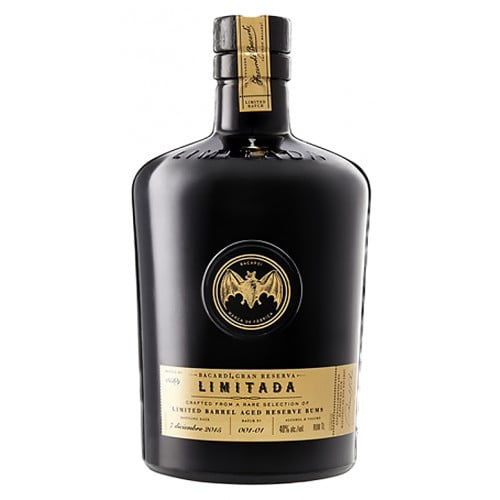