Size750mL Proof84 (42% ABV)
Produced in a small town on the outskirts of Rio de Janeiro, this sugar cane spirit is hand-crafted using traditional methods. The expression spends 2 years in French oak that used to hold white wine, imparting the spirit with vanilla and butterscotch notes.
Notify me when this product is back in stock. 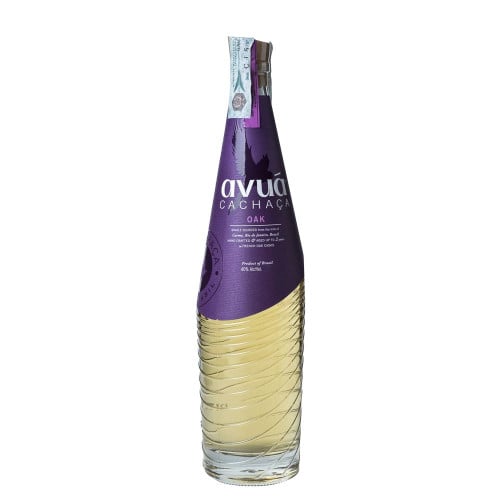 During the 17th century, the Madeira archipelago (situated about 200 miles north of the Canary Islands off the coast of Africa) was a major exporter of sugar and sugar cane to much of Portugal and Western Europe. As Algerian pirates began raiding European cargo ships in the late 18th century, however, and Napoleon plunged Europe into a series of wars beginning in 1803, the waters off the coast of the Madeira archipelago became too dangerous to navigate. As a result, the production of sugar cane, as well as cachaça — a spirit distilled from sugar cane — shifted from Madeira to Brazil. Since then, cachaça has become the most popular spirit in Brazil and the third most popular spirit in the world.

Avuá Cachaça is made from 100% estate-grown sugar cane harvested from a small town situated just three hours outside of Rio de Janeiro. The sugar cane is grown on the town's sharp slopes in an intense, subtropical environment, and is hand-cut by local farmers before being crushed using a waterwheel-powered grinder. The sugarcane juice extracted from the grinder is then strained and fermented using local airborne yeast into a wash called garapa (garapa is used figuratively to mean "a good thing").

The garapa is then distilled using an ancient process derived from the Iberian method of distillation in copper alembic stills. After distillation, Avuá Cachaça Oak spends 2 years in French oak (carvalho) that used to hold white wine. These barrels impart vanilla and butterscotch notes to the spirit. After aging, the cachaça is bottled at 80 proof.

Get your bottle of this aged cachaça today!

The nose opens with inviting tropical fruit and vanilla aromas. The palate has vanilla, butterscotch, caramel, and orange zest notes, culminating in a layered finish with tropical fruit, a touch of bitterness, spice notes.