Learn more
Size750mL Proof104.2 (52.1% ABV) *Please note that the ABV of this bottle may vary
Released on Ardbeg Day 2013, this limited edition single malt whisky commemorates the plethora of peat bogs found on the island of Islay. 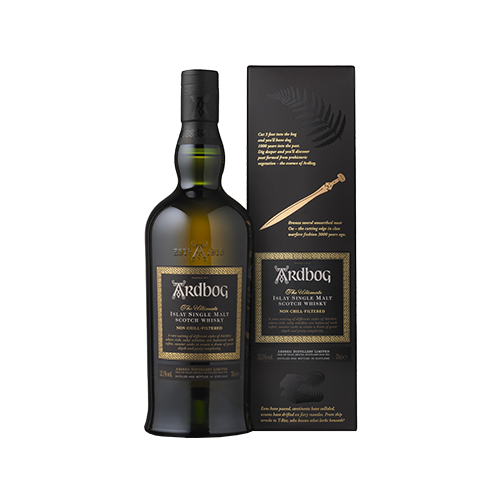 Each year, the distillery commemorates Ardbeg Day — a day celebrating the distillery's founding — with the release of a new whisky. Ardbeg Ardbog Single Malt Scotch Whisky was released on Ardbeg Day 2013 (June 1, 2013), and celebrates the plethora of peat bogs that are found on the island of Islay.

Once the whisky has been distilled, a portion (60%) of Ardbeg Ardbog is matured in used, American oak bourbon casks for a minimum of ten years, while the remainder is matured (also for a minimum of ten years) in Spanish oak casks that were previously used to mature Manzanillia sherry. "The Manzanilla maturation weaves salty flavors through the whisky," says Mickey Heads, Ardbeg's Distillery Manager, "which is then balanced with the maple syrup creaminess of the first-fill ex-bourbon casks."

Ardbeg Ardbog Single Malt Scotch Whisky has classic notes of peat and smoke, which are balanced by touches of rich, dark fruits, crème brulee, vanilla and caramel. Only a select number of Ardbog bottles are available, and since Heads believes this it is the best special edition of Ardbeg he's ever tasted, they are sure to sell fast. Pick up yours today!

Hints of dark fruits, particularly cherries and raspberries, along with touches of smoke and peat. Classic notes of peat and smoke, which are balanced by notes of fruits (particularly plums, apricots, cherries and blackberries), crème brulee, vanilla and caramel. Finish is long and warm, with a touch of spicy smoke.