Learn more
Size750mL Proof108.4 (54.2% ABV) *Please note that the ABV of this bottle may vary
Named after Ardbeg's unique water source. This whisky was named "Whisky of the Year" by the Whisky Bible in 2009, receiving 97.5 points out of 100, the highest rating ever awarded by Mr. Murray! 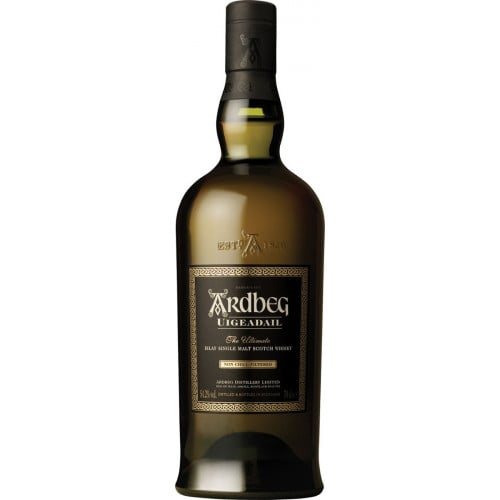 Ardbeg Uigeadail (pronounced "Oog-a-dal" ) Single Malt Scotch Whisky takes its name from Loch Uigeadail, which is situated 800 feet above sea level and remains the only source of pure water for the distillery. "It's one of the raw materials we must have," says Michael Heads, Ardbeg's Distillery Manager, of the water sourced from the loch. "Loch Uigeadail translates as " the dark place' — it's got very deep, peaty water in it and it's what we require for making our bold whisky. So it's vitally important."

Ardbeg Uigeadail Single Malt Scotch Whisky is made from a marriage of Ardbeg Whisky that has matured in ex-bourbon and ex-sherry casks. The bourbon casks contribute notes of honeyed oak, cinnamon and baking spices to the whisky, and provide it with Ardbeg's notorious intensity. The sherry casks contribute notes of dried fruits, berries, figs and caramelized oranges to the whisky, and contribute an unparalleled depth and complexity.

Ardbeg Uigeadail earned the Double Gold Medal at the San Francisco World Spirits Competition in 2011 and 2012, and a score of 95 points from Whisky Advocate. In addition, the whisky earned a score of 97.5 points from the Whisky Bible, which named it the Whisky of the Year.

Pick up a bottle of the Whisky of the Year today!

Aroma of Christmas cake, violet, ocean spice, cedar and chewy leather. Initially sweet flavor profile, with touches of cherry, dark chocolate and caramelized oranges. Subtle undertone of peat, with touches of honey and tobacco. Finish is long and chewy, with notes of raisins, figs and mocha.