Size750mL Proof114.2 (57.1% ABV)
Named after the treacherous waters off the coast of Scotland, this whisky earned a score of 96 points from Whisky Advocate which named it "Single Malt of the Year" in 2010. It was also named "World's Best Single Malt" by the Whisky Magazine the same year. 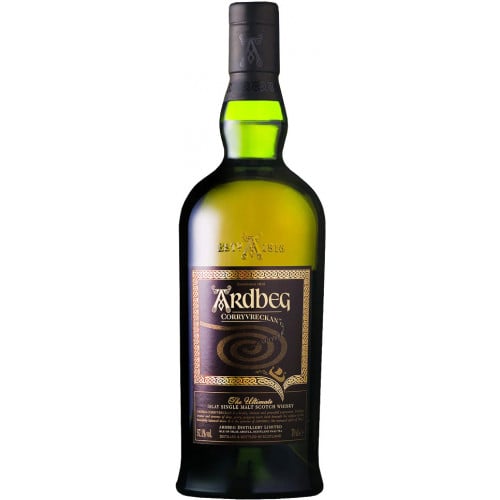 Skip to the beginning of the images gallery
Best Single Malt

Situated between the islands of Jura and Scarba off the western coast of Scotland, the Strait of Corryvreckan is one of the most treacherous and unnavigable waterways in the entire world. The straight suffers from strong Atlantic currents and an unusual underwater topography that conspire to produce intense eddies and tidal flows up to 9 knots. In addition, the Corryvreckan whirlpool, which is the third largest whirlpool in the world, creates terrific inflows that result in waves over 30 feet high (the roar of the whirlpool can be heard over ten miles away).

Much like the whirlpool from which it derives its name, Ardbeg Corryvreckan Single Malt Scotch Whisky is "heady, intense and powerful," says Dr. Bill Lumsden, Ardbeg's Head of Distilling and Master of Whisky Creation. Lumsden, who holds a PhD in Biochemistry (he wrote his dissertation on yeast physiology) and is the only person in the world to have been honored with Whisky Advocate's "Industry Leader of the Year" award three times, is one of the most respected figures in the Scotch whisky industry.

Ardbeg Single Malt Scotch Whisky is made from malted barley, which is peated to approximately 50 phenol parts per million. Once the peated barley arrives at the distillery, it is milled and mashed with water sourced from Loch Uigeadail, which is situated approximately 3 miles away from the distillery. Then, the mashed barley is fermented in washbacks made of Oregon pine. While wooden washbacks are more expensive and difficult to maintain as compared to stainless steel washbacks, they absorb a portion of the heat generated during the fermentation process and thus, create a lighter and more rich whisky. In addition, the wooden washbacks contribute estery, carbolic compounds to the whisky.

Following fermentation, which lasts for 55 hours, the wash is distilled twice, first through a copper-pot wash still and then again through a copper-pot spirit still. The spirit still is equipped with a purifier, which acts as small condenser and causes a portion of the evaporating vapors to be pumped back into the pot and then re-distilled. This purification process, which is rare in the industry, results in whisky that has a signature fresh and malty flavor. Following distillation, Ardbeg Corryvreckan is matured in a combination of used American oak and French oak casks. Once it has reached its peak of maturity, each batch is bottled at 114 proof.

Ardbeg Corryvreckan has an aroma of dark chocolate, linseed oil, dark cherries and smoky peat. The aroma opens up to notes of plums, black fruit, seaweed and orange marmalade, which are complemented by a bold peaty undertone. The finish is long and deep, with lingering notes of chili peppers and chocolate. The whisky earned a score of 96 points from Whisky Advocate which named it "Single Malt of the Year" in 2010. It was also named "The World's Best Single Malt Whisky" by Whisky Magazine the same year.

Pick up a bottle of the best today!

Aroma of dark chocolate, linseed oil, dark cherries and smoky peat. Notes of plums, black fruit, seaweed and orange marmalade, which is complemented by a bold and peaty undertone. Finish is long and deep, with lingering notes of chili peppers and chocolate.