Size750mL Proof86 (43% ABV)
This Year of the Dog Limited Edition Johnnie Walker designed in collaboration with Taiwanese artist Page Tsou, to commemorate the Chinese New Year. Inspired by the sentimental bond between Johnnie Walker and his beloved canine companion.
Notify me when this product is back in stock. 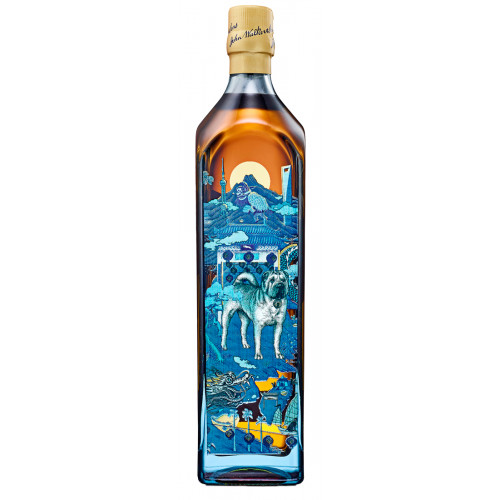 Johnnie Walker Blue has a subtly sweet aroma with notes of bittersweet chocolate, caramelized oranges and a touch of tobacco. The initial notes of roasted nuts and smoky chocolate are complemented by hints of rich fruits (including pears), dates, toasted bread and delicate brown spices. The finish, which is incredibly smooth, has a touch of pecan pie, milk chocolate, peppercorn, and figs. The whisky earned the Double Gold Medal at the San Francisco World Spirits Competition in 2013 and earned a score of 95 points from Wine Enthusiast Magazine.

This Lunar New Year Limited Edition Johnnie Walker Blue Label design is a symbol of the sentimental bond between man and his canine companion, inspired by the Dog as a symbol of prosperity. Create in collaboration with Taiwanese artist Page Tsou. The bottle’s distinctive design “tells the story of Johnnie Walker and his clever canine companion as they journey around the world bringing prosperity and rejoicing in the arrival of the new year” (producer).

Aroma of bittersweet chocolate, caramelized oranges and a touch of tobacco. Initial notes of roasted nuts and smoky chocolate are complemented by hints of rich fruits (particularly pears), dates, toasted bread and delicate brown spices. Finish, which is incredibly smooth, has a touch of pecan pie, milk chocolate, peppercorn, and figs.