Size750mL Proof93 (46.5% ABV)
This special Ardbeg Night bottling was aged in heavily-seasoned sherry casks and is said to be the “darkest Ardbeg ever.”
Notify me when this product is back in stock. 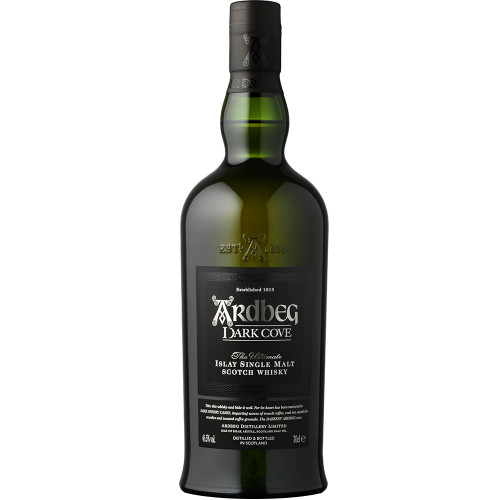 Beneath the surface, however, the distillery has a checkered past. Ardbeg was once a notorious hideout for smugglers, who plied their trade within its hidden caves and secret beaches — dark tales abound of daring deeds and narrow escapes from the island’s excise men in the years before the McDougalls founded the distillery.

Inspired by its murky past, this year Ardbeg has — for the first time ever — decided to plunge its annual Ardbeg Day into Ardbeg Night. To commemorate Ardbeg Night, which will take place on May 28th, 2016, Ardbeg has released Ardbeg Dark Cove Islay Single Malt Scotch Whisky, a limited-edition bottling which Mickey Heads, the distillery’s manager, claims is its “darkest ever.”

Ardbeg Single Malt Scotch Whisky is made from malted barley, which is peated to approximately 50 phenol parts per million. Once the grains have been fermented, they are distilled twice, first through a copper-pot wash still and then again through a copper-pot spirit still. The spirit still is equipped with a purifier, which acts as small condenser and causes a portion of the evaporating vapors to be pumped back into the pot and then re-distilled. This purification process, which is rare in the industry, results in whisky that has a signature fresh and malty flavor.

This limited-edition whisky is sure to sell out quickly — pick up a bottle (or two) today!

Notes of cured meats, chocolate oranges, coffee, oil, and blackcurrant on the nose. The palate transitions to tart flavors of lime, honey, ginger, pepper and oak, and leads to an exquisite finish marked by almonds, toffee, raisins, dates and wood polish.