Size750mL Proof120.4 (60.2% ABV)
Angel's Envy annual Cask Strength Bourbon started a decade ago with a first run of only 600 bottles. The 2021 release is a beautifully bold 120.7-proof whiskey that was finished in Portuguese ruby Port wine casks and features notes of toasted oak, vanilla, and leather. 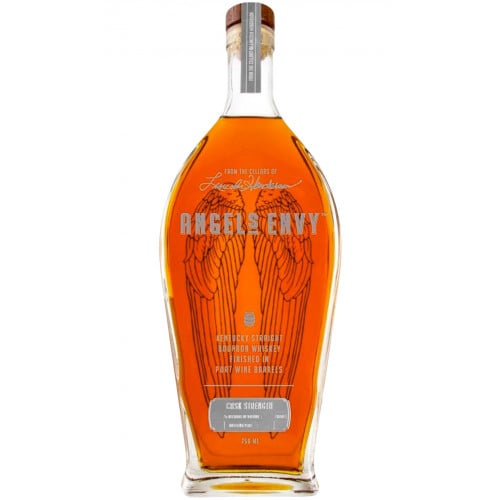 Angel's Envy Cask Strength Bourbon has them choosing the best barrels from their rickhouse each year and was named "Best Spirit in the World" in F. Paul Pacult's Spirit Journal in 2013. 2021 marks the tenth release in the annual series that started with a first run of just 600 bottles and is now up to 14,760 for this year's release. It's a beautifully bold 120.7-proof bourbon with a shortened Portuguese ruby Port cask finish that features notes of toasted oak, vanilla, and leather.

Get your bottle of this cask-strength bourbon today!

It's a beautifully bold bourbon with toasted oak, leather, vanilla, baking spice, honey, and peach on the nose. The palate has considerable depth with notes of dark fruit, orange zest, oak, and hints of chocolate. The finish is fruity with lingering citrus, cedar, spice, and a pleasant warmth.