Size750mL Proof122.4 (61.2% ABV)
This incredible 2019 cask strength Angel’s Envy is released in a very limited number of bottles, pulled from the most remarkable barrels in the Angel’s Envy rickhouse.
Notify me when this product is back in stock. 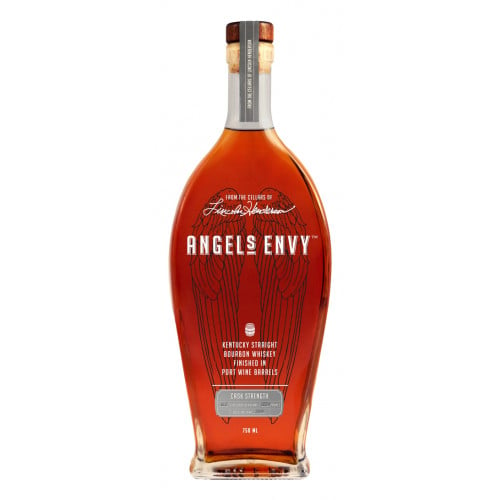 After graduating college, Henderson joined Brown-Forman as a grain chemist and was eventually promoted to Master Distiller. During his 40-year tenure at Brown-Forman, Henderson honed his skills while developing new brands such as Woodford Reserve Bourbon, Jack Daniel's "Gentleman Jack" and Jack Daniel's Single Barrel Whiskey. In addition to being responsible for the development of new products, Henderson oversaw quality control, technical distillery supervision and sensory evaluation. "I never regretted a day when I had to go to work," says Henderson, who was awarded Malt Advocate's Lifetime Achievement Award and was an inaugural member of the Kentucky Bourbon Hall of Fame.

After retiring from Brown-Forman, Henderson decided to go rogue and launched Angel's Envy Bourbon. "Angel's Envy is a lot of things," says Henderson. "It's my life's work. It's a whiskey of incomparable smoothness. It takes into account over 200 years of bourbon heritage and mingles it with over 400 years of port wine heritage." The name is derived from the term "angel's share" - the portion of whiskey that evaporates as it ages in wooden barrels. After tasting the bourbon, Henderson realized that the angel's might want a larger cut.

Angel’s Envy Cask Strength Finished in Port Wine Barrels represents the finest whiskey Angel’s Envy creates. Once in a great while, they discover what they call a honey barrel—it might be one in one hundred, but there’s just something exceptional about these barrels. Once they find the right flavor balance, Angel’s Envy blends them in small batches for their yearly Cask Release each autumn. Ranked the “Best Spirit in the World” by F. Paul Pacult’s 2013 Spirit Journal, every year’s release is utterly unique in its flavor profile.

Honey, apple, butterscotch, toffee and mellow vanilla, as well as hints of oak and toast. On the nose, notes of honeyed apple, peach, apricot and overripe banana are present, along with black tea, toasted oak with a slight char and faint floral notes. The medium-length finish includes pleasant tannin notes trailing into black tea.