Learn more
Size750mL Proof92 (46% ABV) *Please note that the ABV of this bottle may vary
This stellar whisky was aged for over two decades in a combination of ex-bourbon American oak casks and ex-Oloroso sherry butts.
Notify me when this product is back in stock. 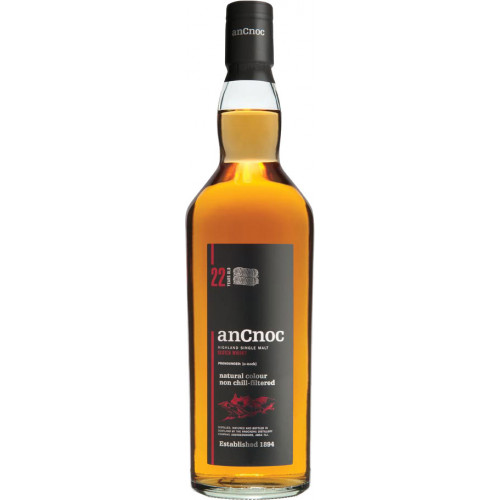 Over a century after its original founding, little has changed at the distillery. The distillery uses no computers to aid in its whisky production, rather, the entire process is dependent upon the individual skills and expertise of the distillery workers themselves. anCnoc Single Malt Scotch Whisky (anCnoc is one of the few whiskies not named after the distillery that produces it) is made from fresh, plump barley, much of it still harvested from the fields that surround the distillery. Once the grains have been harvested, they are malted and mashed before being fermented in one of the distillery’s six original wooden washbacks.

Following fermentation, the wash is distilled twice through Knockdhu’s century-old, copper-pot stills. The stills have unusually flat bases as compared to stills at other Scottish distilleries, which forces the alcohol vapors to travel up the long, narrow neck of the still and results in a lighter and more fruity whisky. In addition, the stills are equipped with worm tubs — large tanks of cold water that are used to condense the alcohol vapor back into a liquid spirit. These worm tubs — most distilleries abandoned worm tubs for condensing units long ago — are a testament to Knockdhu’s commitment to producing a traditional style of malt whisky.

Following distillation, anCnoc 22 Year Old Single Malt Scotch Whisky is aged in a combination of casks — predominantly American oak, ex-bourbon casks, but also some ex-Oloroso sherry butts — that are quietly laid to rest in the distillery’s dunnage warehouse. The dunnage warehouse’s thick granite walls and unique location results in stable temperatures, and allows the whisky to develop consistently. After more than two decades of maturation in the dunnage warehouse, the whisky is bottled. anCnoc 22 Year Old Single Malt Scotch Whisky has a bright golden color with a copper penny tint, along with an aroma of honey, toffee and caramelized apples all wrapped in a delicate wood fire. The aroma gives way to notes of Christmas cake, baking spices and lemon peel, and further blood orange, vanilla and raisins on the palate lead to a soft and smooth finish.

Just over 5,000 bottles of this whisky have been released to select markets throughout the globe.

Bright golden color with a copper penny tint. Aroma of honey, toffee and caramelized apples all wrapped in a delicate wood fire. Aroma gives way to notes of Christmas cake, baking spices and lemon peel, and further blood orange, vanilla and raisins on the palate lead to a soft and smooth finish.