Size750mL Proof100 (50% ABV)
A unique blend of whiskies made from peated Scottish barley and unpeated Indian barley, this whisky was rated the third best in the world in 2009. 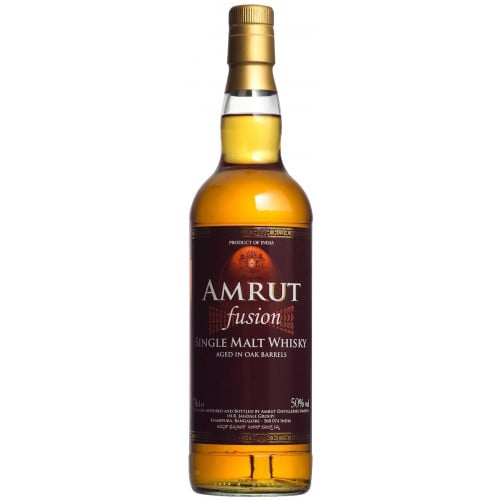 Amrut Fusion Single Malt Whisky is a marriage of whiskies made from peated Scottish barley and unpeated Indian barley. The Indian barley, nourished by the waters of the Himalayan mountains, is grown in a region known as Punjab (meaning "the land of five rivers"), where the cold winters and fiery summers create a unique quality of grain, rich in nutrients and flavor. The malted Scottish barley, which is dried over a peat fire, is imported from Scotland to India.

With subtle notes of peat, vanilla, chocolate fudge and fruit, Amrut Fusion was rated the third best whisky in the world by Jim Murray's Whisky Bible, scoring an incredible 97 points in 2009.

"There is demand, but we can't service it," says Jagdale, Amrut's Chairman. "We cannot accelerate the maturation process. A good whisky can never be a mass product."

Complex and chewy, it has a nose of milk chocolate, oak and almonds. Light on the palate, with notes of coconut and fruit. A medium long finish with hints of vanilla and peat.