$129.99
Caskers Rewards members earn up to 6 store points back when buying this bottle.

Size750mL Proof91.8 (45.9% ABV)
A rich, complex, and balanced French whisky that is matured in rare cognac casks — ones that were used to age very old cognac for decades. Given the limited availability of these casks, this is a strictly limited-production whisky.
Notify me when this product is back in stock. 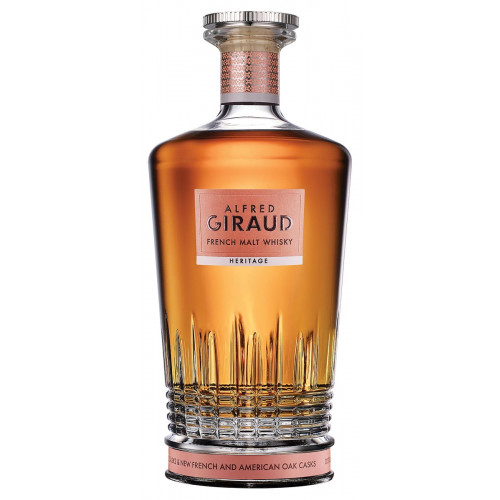 Alfred Giraud Heritage French Malt Whisky is their non-peated offering. Its production is limited and dependent on the number of extraordinary casks they can acquire. The majority of the maturing of the three French malt distillates in the blend takes place in hand-picked very old ex-cognac casks, with some additional new French Limousin and American oak casks. Afterwards, the blend matures solely in extra old ex-cognac casks. This results in an incredibly rich, complex, and balanced aromas that introduce a full-bodied palate with sweetness, candied fruit, and pears, ending in a satisfyingly sweet finish.

When compared to a juggernaut such as Scotland, French whisky-making is still in its infancy, having begun in the late 1980s. They are, however, no strangers to producing premium spirits. The story of Alfred Giraud begins in 1910 when Louis Giraud started working in a Maison de Cognac (cognac house), where he honed his skills in production, blending, and aging. His son Alfred and grandson André followed in his footsteps, working in cooperage and eventually becoming Cellar Masters. The tradition wasn't broken until Jean-Pierre Giraud decided to turn to Scotch whisky in 1995. This led to the creation of Alfred Giraud French Malt Whisky, named after Jean-Pierre's grandfather.

The operation relies on a number of factors: The triple malt blend is sourced from 3 renowned distilleries, among them Warrenghem — the first French distillery to take on whisky. Then there is the family's deep knowledge of wood, aging techniques, as well as their forestry operation in Limousin that provides wood for casks. They take pride in their blending expertise that stems from cognac, where up to 80 different liquids can make the final blend.
Explore all Alfred Girald bottles >>

The ex-cognac casks impart the smoothness of the cognac and make for incredibly rich, complex, and balanced aromas. They are followed by a full-bodied palate with sweetness, candied fruit, and pears, ending in a satisfyingly sweet finish.