This product is available in: CA, NY, TX Unfortunately, we can't ship to PO Boxes and APO addresses.

Size750mL Proof92.2 (46.1% ABV)
This lightly-peated French whisky is matured in rare cognac casks — ones that were used to age very old cognac for decades. Given the limited availability of these casks, this is a strictly limited-production whisky that is as complex as the journey it makes before being bottled.
Notify me when this product is back in stock.

This product is available in: CA, NY, TX Unfortunately, we can't ship to PO Boxes and APO addresses. 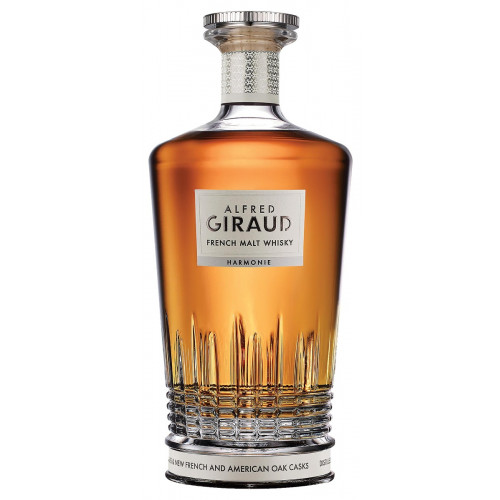 When compared to a juggernaut such as Scotland, French whisky making is still in its infancy, having begun in the late 1980s. They are, however, no strangers to producing premium spirits. The story of Alfred Giraud begins in 1910 when Louis Giraud started working in a maison de cognac (cognac house), where he honed his skills in production, blending, and aging. His son Alfred and grandson André followed in his footsteps, working in cooperage and eventually becoming Cellar Masters. The tradition wasn't broken until Jean-Pierre Giraud decided to turn to Scotch whisky in 1995. This led to the creation of Alfred Giraud French Malt Whisky, named after Jean-Pierre's grandfather.

The operation relies on a number of factors: The triple malt blend is sourced from 3 renowned distilleries, among them Warrenghem — the first French distillery to take on whisky. Then there is the family's deep knowledge of wood, aging techniques, as well as their forestry operation in Limousin that provides wood for casks. They take pride in their blending expertise that stems from cognac, where up to 80 different liquids can make the final blend.

The Alfred Giraud Harmonie lightly-peated expression has a long journey before being bottled. It's based on 3 non-peated French malt distillates that have been matured in 3 different casks. The majority of the maturing takes place in hand-picked very old ex-cognac casks, with some additional new French Limousin and American oak casks. Afterwards, the blend matures solely in extra old ex-cognac casks. It is then blended with a lightly-peated French malt distillate and finished in those very same extra old ex-cognac casks before being bottled at 92.2 proof. The resulting spirit is as complex as its long journey and strictly limited, as it depends on the number of extraordinary casks they can acquire.

Get one of these limited bottles today!

It's a long journey to a complex, balanced, and refined profile. The extra-old cognac oak and an elegant, gentle smokiness on the nose give way to a fruity and floral palate with a slight touch of peat. It's a supremely smooth experience up to the satisfyingly long and pleasantly sweet finish.