Learn more
Size750mL Proof80 (40% ABV) *Please note that the ABV of this bottle may vary
Alexander Murray Macduff 17 Year Old 2002 is a single malt Scotch whisky, distilled at the Macduff Distillery and matured in refill Bourbon hogsheads. This rounded expression, bottled at 80 proof, is a perfect pick-me-up whisky.
Notify me when this product is back in stock. 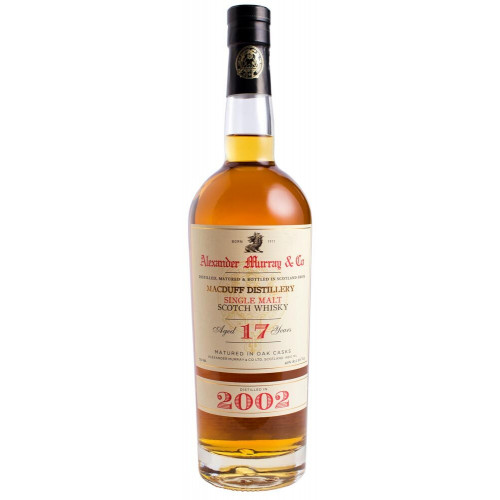 Macduff Distillery is a single malt Scotch whisky distillery, located in a fishing port of the same name on the northeast coast of the Highlands. The distillery known for making bold, rich and nutty whisky was established by a group of Glasgow brokers in 1960 and officially started production in 1963, making it a rather young distillery by Scottish standards. The facility with five stills – two wash stills and three spirit stills – has a production capacity of 2.4 million liters, and draws it water from local sources, including the Gelly burn. It is currently owned by John Dewar & Sons, a subsidiary of Bacardi. Macduff makes the Deveron whisky, and a range of expressions for various independent bottlers.

Alexander Murray Macduff 17 Year Old 2002 is a single malt Scotch whisky, distilled at the Macduff Distillery in 2002 and matured in refill Bourbon hogsheads. This rounded expression, bottled at 80 proof, is a really nice pick me up.

This rounded expression is rich, sweet and fruity one second, and dry and nutty the next, with touches of dry grass, wood smoke, and rich apricot.