Caskers Rewards members earn up to 4 store points back when buying this bottle.
Size750mL Proof80 (40% ABV)
This blended whisky, aged 8-10 years in first-fill Oloroso Sherry casks, scored a 92 point rating from Whisky Advocate.
Notify me when this product is back in stock. 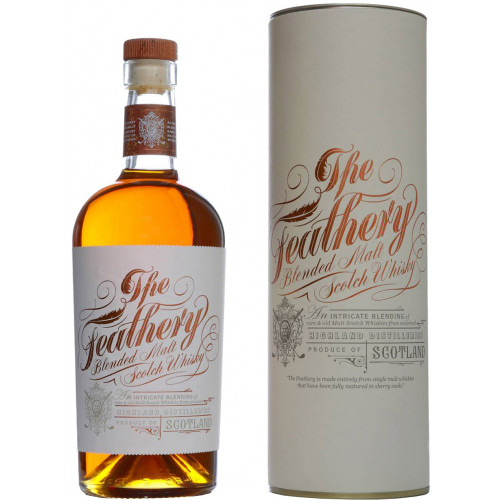 Aside from whisky, there may be no other tradition as sacred to Scottish culture as golf. In the game’s early days, balls were hand-crafted with goose feathers (as many as could fit in a gentleman’s top hat), tar and bird skin, creating a perfectly rounded ball that was more streamlined and effective than the previously used leather balls. The downside, however, was that the new balls — appropriately dubbed “featheries” — were extremely time-consuming and costly to produce. As such, two spotters were required on the course at all times to ensure the featheries weren’t lost.

The Feathery Blended Malt Scotch Whisky pays homage to the traditional Scottish craftsmanship that went into making each feathery ball. The whisky is produced by blending three Highland single malts — Tamdhu, Glengoyne and Glendronach — which have been matured 8-10 years in first-fill Oloroso Sherry casks.

As a result, The Feather Blended Malt Scotch Whisky has an intense aroma of chocolate, raisins, leather and mixed nuts. Flavors of orange candy, toffee, malt and black cherry dominate the palate, and lead to a finish accented with oak, licorice and dates.

Intense aroma of chocolate, raisins, leather and mixed nuts. Flavors of orange candy, toffee, malt and black cherry dominate the palate, and lead to a finish accented with oak, licorice and dates.