Size750mL Proof46% ABV
A Compass Box Classic, with An Extravagant Twist.
Notify me when this product is back in stock. 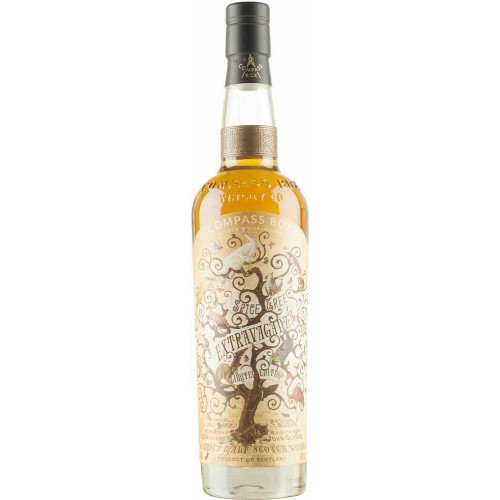 Glaser pushes the boundaries of innovation to new levels with his art of “whiskymaking.” Seemingly uninhibited by the norms of the formidable Scottish whisky industry, Glaser has proven himself a true alchemist. In 2005, his aptitude for wine making prompted a disruptive experimental sensation; The Spice Tree release, a blended whisky made using inner staves, or wooden slats inserted into casks to enhance flavor. Wine-makers use this technique as a more economical way to add oak flavor wine.

The Spice Tree blend used oak staves from 195-year-old forests, that were seasoned for two years, heavily toasted to Glaser’s specifications, and inserted into oak barrels. Although the release was well received by the public, the technique used to make the whisky received much scrutiny from the SWA. It was eventually banned from the market. Glaser eventually developed a new method of adding flavor, by inserting toasted new oak French cask heads into the barrels. With this revision of methodology, Spice Tree re-emerged onto the market in 2009.

Compass Box’s Spice Tree Extravaganza release is a Highland blend, inspired by their controversial signature range classic, with the trademark Spice Tree ginger and clove spice character. It is composed of malt whiskies from the Glen Ord, Benrinnes, Clynelish, Dailuaine, Teaninich, and Allt a Bhainne distilleries. The blend is then aged in hybrid, ex-bourbon barrels. A significant portion of the blend is sherry-cask aged, infused with decadent notes of dark berries, juicy red fruit and dark brown sugar, the finish is long and spicy.

On the nose there are decadent notes of sherry and dark berries. The flavors of juicy red fruit, dark brown sugar, and a trademark Spice Tree ginger and clove, infuse the palate. The finish is long and spicy.