Size750mL Proof108 (54% ABV)
A cask-strength Laphroaig single malt, this is a uniquely peaty expression from the legendary Scottish distillery that stands right on the shores of Islay. Alexander Murray Laphroaig 12-Year-Old was awarded Gold at the 2018 San Francisco World Spirits Competition.
Notify me when this product is back in stock. 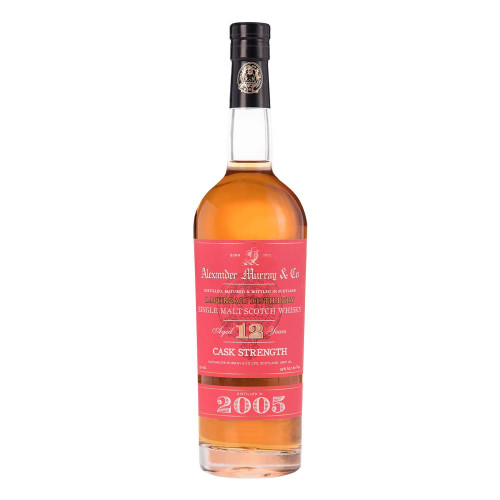 This sumptuous bottle comes from the legendary Laphroaig distillery that was founded in 1815 when Donald and Alexander Johnston leased 1,000 acres of land on the island of Islay. Their intent was to raise and sell cattle on the land and as a result, they began growing barley to be used as feed for their livestock. Following a particularly bountiful harvest, the brothers distilled the excess grains they had grown into whisky and sold it to the inhabitants of the island. Soon thereafter, the brothers found it more profitable to distill whisky than to raise cattle, and Laphroaig (pronounced La-froyg) Distillery was born.

The distillery remained in the family for over a century of its bloodline, until 1954, when, upon his death, a childless Ian Hunter bequeathed the distillery to Bessie Williamson, a secretary that had been working at the distillery for two decades. Standing firmly on the Islay coast with the waves crashing against the distillery's bricks, the sea's formidable power has imparted the taste of every Laphroaig bottle.

Distilled, matured and bottled at cask strength on the shores of Islay, Alexander Murray Laphroaig 12-Year-Old is an Islay single malt. This expression offers unique peat flavors as Laphroaig uses their own peat beds at Glen Machrie and their peat contains high levels of 'Sphagnum', a species of moss that results in iodine-like flavors. The production process also retains relatively large amounts of phenols (ppm) but due to the 12 years of maturation in ex-bourbon casks the resulting spirit is a magnificent balance of smoke, peat, and sweet fruity flavors. A complex and layered Scotch whisky, this grand bottle is a worthy addition to any whisky connoisseur’s collection.

Get your cask-strength Laphroaig!

A heavily peated nose with a strong maritime influence and aromas of iodine and barbecue smoke. The palate is layered, complex and sweet with strong peat and smoke notes. The finish is long with peaty flavors on the aftertaste.