Size750mL Proof94 (47% ABV)
Adnams rye Malt is a modern-era English rye whisky crafted from sustainably farmed grain.
Notify me when this product is back in stock. 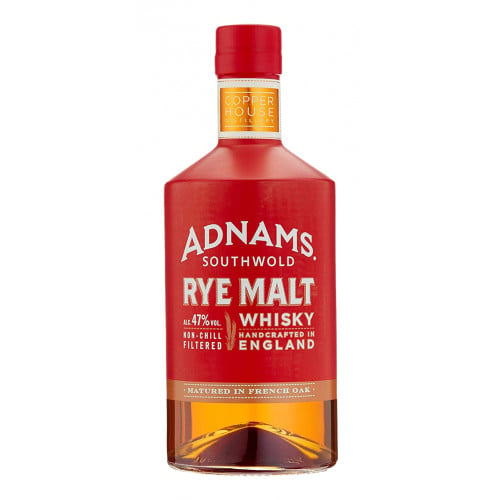 Adnams is a world-class award-winning brewery founded in 1872 in Southwold, Suffolk, England. In 2010, the Adnams created the Copper House distillery for the production of gin, vodka and whisky. Adnams in addition to their malted barley creations, also features a Triple Malt expression, wheat and oats, and Rye Malt spirits.

Adnams Rye Malt is a modern-era English rye whisky with a mashbill 75% rye, and 25% malted barley, entirely matured in sourced new French virgin oak for at least five years. Rye has been farmed for centuries in the UK, and this whisky is crafted from sustainably farmed grain grown on a facility in Southwold. Non-chill filtered and bottled at 47% ABV, this rye’s distinct flavor profile highlights notes of rye spice, baking spice, sweetness, citrus peel, and oak.

Baking Spice and cracked black pepper on the nose followed by citrus peel, vanilla, rye and sweet golden syrup. The palate is dry with rye spice, dried fruit, cocoa, honeyed malt and berries. On the finish are lingering notes of ground coffee.