Size750mL Proof95 (47.5% ABV)
Aged for approximately three years, this bourbon is made from grains-to-glass in Denver. 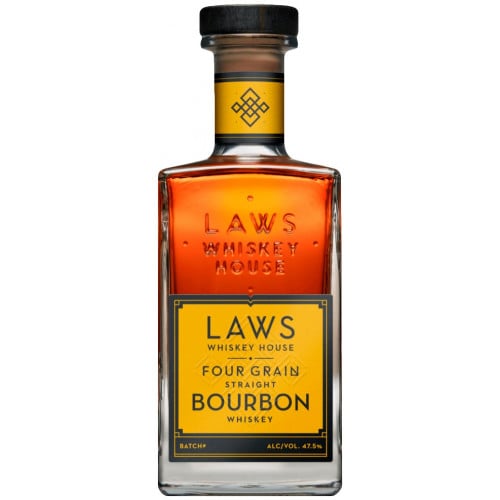 Laws Whiskey House is a dedicated, no compromise whiskey company. The distillery was founded by Alan Laws in 2010 in Denver Colorado in the historic Gates Neighborhood. Laws and team, alongside Bill Friel, former master distiller of Barton’s, perfected the whiskey over several years. Crafting the one-of-a-kind spirit into what it is today. Laws Whiskey takes “an obsessive, hands-on approach to every aspect of whiskey production,” every step of production is carried out in-house.

The flagship bourbon is made from a recipe of corn, wheat, rye and malted barley, all of which (except the corn) come from the Colorado Malting Company (the corn was imported from Wisconsin but is now sourced in state).“We let American whiskey’s four mother grains inspire us to not only create our four grain straight bourbon, but also to break each grain out into its own expression, showcasing its contribution to the bourbon.” — Al Laws

All the grain is triple cleaned, It's expensive, and requires special equipment. The grain is milled and combined into a sour mash which is open air fermented for four days. Following fermentation of the grains, the wash is distilled through a custom made four-plate Vendome hybrid copper-pot/column still.

The bourbon is then matured in 53-gallon American white oak casks that were crafted by the Independent Stave Company in Missouri (the distillery had 1,000 barrels aging already). There, the bourbon matures for approximately three years. The Colorado mountain climate is rife with changes in temperature and air pressure. Former Laws team member Jack Norris stated that as the spirit ages, “the magic of time, charred oak planks and high mountain air transform it into a rich, complex, spicy, Straight American four grain bourbon.”

Following this three-year beauty rest, the bourbon is brought to proof and bottled by hand. The bourbon has sweet aromas of roasted corn, grilled peppers, cayenne pepper and chiles. Notes of chewy leather, toasted wheat, caramel, vanilla, spicy rye, and buttered almonds dominate the palate, and lead to a finish accented by touches of spicy rye and moist tobacco.

Pick up a bottle of Laws Four Grain Bourbon today!

3.9 out of 5
(2 reviews)
Write a review
Real email address is required to social networks
Sign in
Login with Google
Login with Facebook
Or
We also recommend