Size750mL Proof80 (40% ABV)
The double-cask maturation of this Speyside whisky expression from Aberlour's core range means it was matured in both ex-bourbon casks from Kentucky as well as oloroso sherry casks from Spain.
Notify me when this product is back in stock. 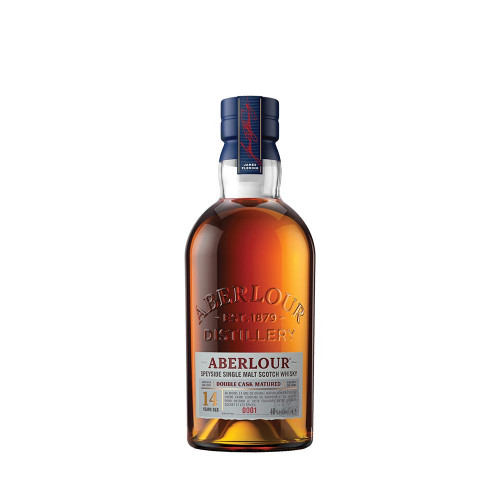 Situated at the confluence of the Rivers Lour and Spey in Strathspey, Scotland, the Aberlour Distillery was founded in 1879 by James Fleming. Fleming, who was the son of a local tenant farmer, ultimately became a grain dealer in the middle of the 19th century. At the time, he counted a number of whisky distilleries as his customers, and after purchasing more barley than he was able to sell, Fleming decided to open a distillery himself.

In 1898, 3 years after Fleming's passing, a fire consumed much of Aberlour Distillery and its inventory of whisky. Following its destruction, the distillery was rebuilt under the supervision of Charles Doig — Scotland's foremost expert of whisky distilleries at the time. While the composition of the distillery and its equipment has inevitably been altered over the past century, Aberlour's commitment to traditional craftsmanship and quality single malt whisky has remained unchanged.

A part of Aberlour's core range, the Aberlour 14 Year Old is a double-cask matured Speyside whisky. It was first matured in ex-bourbon casks from Kentucky, before being finished in Oloroso sherry casks. The expression is crafted in small batches by Master Distiller Graeme Cruikshank and his team. The elegant whisky's rich and elegant profile has brought it several awards, including a Double Gold medal at the International Wine and Spirits Competition in 2020, before the expression was officially released.

Get your bottle of this elegant Speyside whisky today!

The deep amber whisky has a balance of vanilla sweetness, honey, and ripe cherries on the nose. The round palate has caramel, blackcurrant, blackberry jam, and a touch of spice. The finish is sweet, long, and exquisitely balanced.