Learn more
Size750mL Proof91.6 (45.8% ABV) *Please note that the ABV of this bottle may vary
Considered by many to be one of the best in existence. This unique whiskey has a complex history, a legendary origin of near mythic status. Get it while you can.
Notify me when this product is back in stock. 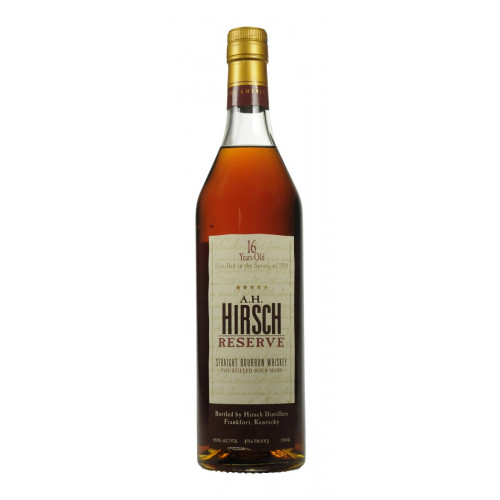 Federal regulations in the United States (27 C.F.R. 5 to be specific) require that bourbon be made from a mashbill of at least 51% corn before being aged in new oak barrels and bottled at 80 proof or higher.  Hirsch Small Batch High Rye is aged in new, charred American oak barrels for eight years.

Their whiskey gets its name from Adolf Hirsch, a former executive of the Schenley Co. who bought some aging barrels of bourbon from the famed Michter's Distillery before it closed in 1988.

Distilled in Spring 1974, this legendary bourbon has had a whole book written about it: "The Best Bourbon You'll Never Taste" by Charles K Cowdery. Bottled from a single 400 barrel batch commissioned by Adolph Hirsch and distilled under contract at Bomberger's distillery, just outside Schaefferstown, Pennsylvania the home of the legendary Michter's whisky.

Referred to in inner circles as 'gold foil’, this 2003 bottling was produced by Buffalo Trace in Frankfort, Kentucky. While the earlier bottle was overseen by Julian Van Winkle III. In 2003 Sazerac acquired the Pappy Van Winkle brand. Distilled in the Kentucky pot-still tradition, this incredible bourbon is considered by many to be one of the best in existence. This unique whiskey has a complex history of ownership giving it a legendary origin of near mythic status. Get it while you can.

Rich sweetness on the nose, creamy vanilla and caramel, followed by oak spice. The palate echoes the nose with smooth complex layers, revealing soft notes, toffee and vanilla followed by a dry oaky finish with smoke, baking spices and a touch of black pepper.