Rating:
80%
(1)
This 8-year-old bourbon gets its name from Adolf Hirsch, who bought aging barrels from the famed Michter’s Distillery before it closed in 1988.
Add to Wish List
Notify me when this product is back in stock.

Federal regulations in the United States (27 C.F.R. 5 to be specific) require that bourbon be made from a mashbill of at least 51% corn before being aged in new oak barrels and bottled at 80 proof or higher.  Hirsch Small Batch High Rye is aged in new, charred American oak barrels for eight years.

Their whiskey gets its name from Adolf Hirsch, a former executive of the Schenley Co. who bought some aging barrels of bourbon from the famed Michter's Distillery before it closed in 1988. This 8-year-old Hirsch Bourbon is distilled from a high rye mash bill: Northern Europe rye as well as corn sourced from Indiana and Ohio. This whiskey is matured for eight years in char #4 oak barrels, which have a char #2 on the heads. Bottled at 92 proof.

A touch of vanilla, butterscotch, malt, barrel char and cherry on the nose. The palate has notes of corn, caramel chocolate, coconut, and subtle notes of cinnamon The finish is bold with spice. 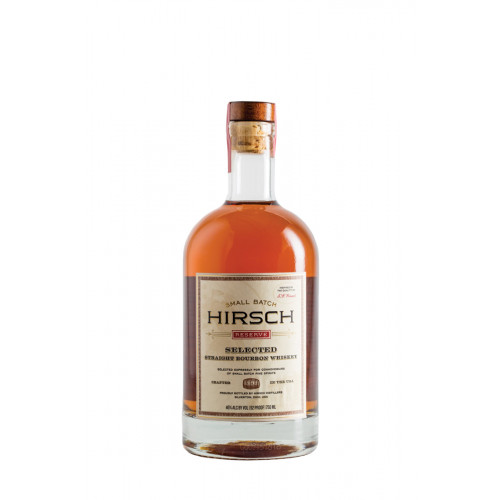