Size750mL Proof98.6 (49.3% ABV)
The latest limited release from the award-winning distillery, 1792 Single Barrel showcases the most exceptional barrels of the bourbon that earned a score of 95 points at the 2016 Ultimate Spirits Challenge.
Notify me when this product is back in stock. 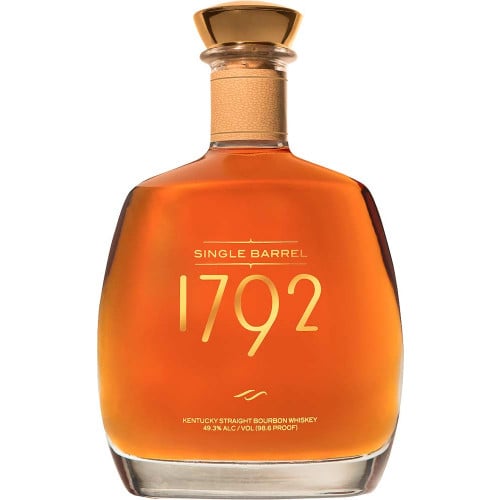 1792 Single Barrel Kentucky Straight Bourbon Whiskey is made from a mash of 75% corn, 15% rye and 10% barley. While the use of corn in the bourbon's recipe adds classic notes of butterscotch and roasted nuts, the heavy use of rye in the bourbon's mashbill yields a more complex and full-bodied whiskey.

After distillation, the bourbon is aged in new, American oak casks in Warehouse Z on the distillery's estate in Bardstown, Kentucky. Warehouse Z is situated on the edge of a bluff and as a result, enjoys the intense heat and humidity that are ideal for maturing whiskey. “In order to create this unique bourbon,” says Ken Pierce, Barton 1792’s master distiller, “the finest barrels are selected and tasted from the best aging warehouses. Only those barrels deemed ‘exceptional’ are then bottled individually, one by one. This preserves the distinct character of each barrel.”

Like the standard issue 1792, the single barrel’s nose is carried by sweet butterscotch notes, though a bit fruitier overall, with hints of ginger and Fuji apple. The palate is caramel-forward, with just a nip due to the rye, leading to a sweet finish tempered with warm bitter cloves.

Previous limited edition releases from 1792 sold well and became scarce quite quickly, and we expect the same from this award-winning distillery’s new single barrel release.

Take home one of these limited edition bottles today!

Like the standard issue 1792, the single barrel’s nose is carried by sweet butterscotch notes, though a bit fruitier overall, with hints of ginger and Fuji apple. The palate is caramel-forward, with just a nip due to the rye, leading to a sweet finish tempered with warm bitter cloves.

3.9 out of 5
(3 reviews)
Write a review
Real email address is required to social networks
Sign in
Login with Google
Login with Facebook
Or
We also recommend