Be the first to review this product
A very small batch of specially selected barrels of Kentucky Straight Bourbon Whiskey finished in No 3 charred wine casks.
Add to Wish List
Notify me when this product is back in stock.

Yellowstone National Park was established in 1876, and just a few short years later, the Yellowstone Kentucky Straight Bourbon Whiskey brand would emerge with an equally-rich story. J.B. Dant, the legendary distiller, and son of J.W. Dant, first began distilling in the late 1800s, using a “log still” instead of the more popular — yet more expensive — copper pot stills (a log still is made by hollowing out a tree trunk and lining the interior with copper pipes, a cheaper yet still effective way of distilling).

As Dant’s Yellowstone brand gained popularity in Kentucky, he was able to purchase other nearby distilleries and formalize his process. In the early 1900s, it was through this expansion that Dant began working more closely with M.C. Beam of the illustrious Beam family. Together, Dant and Beam operated their network of facilities as the Yellowstone Distillery and continued to produce Yellowstone Kentucky Straight Bourbon Whiskey for “medicinal purposes” throughout Prohibition.

Although the Yellowstone brand changed hands several times throughout the 20th century (first to Diageo and recently to Luxco) and eventually fell out of favor, Luxco, along with the Beam family’s new Limestone Branch Distillery, has recently revitalized the brand, unearthing an old Beam family recipe and partnering with Paul and Steve Beam to create a spectacular bourbon that pays homage to the original.

In 2016, Yellowstone finished their Limited Edition bourbon in uniquely fresh new wine barrels, imparting a special flavor to that year’s release. Later that year, after the barrels were emptied and the edition was bottled, those same 28 barrels were lightly charred and filled with their batch of 2017 Limited Edition bourbon. In 2018 those very same barrels, seasoned with a depth of complexity, were deeply charred before being filled with this all-new 2018 Limited Edition Yellowstone Bourbon. With a bit more complexity than its predecessors, this cascading release of barrel-aged ambrosia has enhanced, rich notes of dark chocolate, cherry, and charred oak. 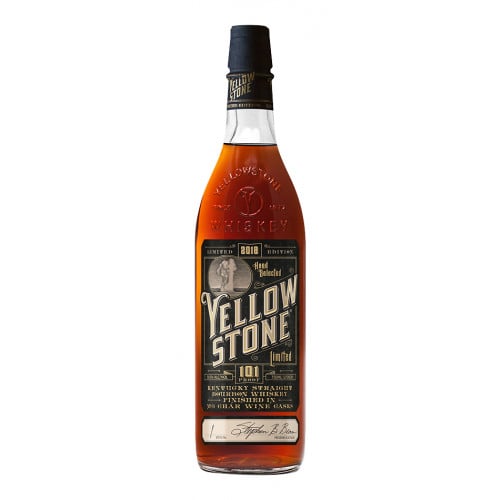