Size750mL Proof105 (52.5% ABV)
This limited edition bourbon is hand-selected by Paul Beam, and has been aged up to 12 years.
Notify me when this product is back in stock. 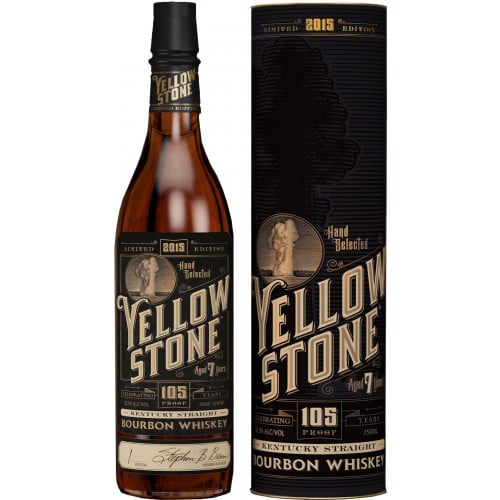 Yellowstone 2015 Limited Edition Kentucky Straight Bourbon Whiskey has been hand-selected by Steve Beam, and is a marriage of 12-year-old high-rye bourbon and 7-year-old wheated/high-rye bourbons. After the 12-year-old bourbon has been extracted from the barrels, the barrels are used once again to finish the 7-year-old bourbons. As a result, Yellowstone Bourbon has an aroma of figs, chocolate and caramel corn, and leads to a bold palate filled with rhubarb vanilla, oak and freshly-baked pie crust. The finish is rich, with hints of raspberries and maple, and incredibly smooth.

“It’s been a dream for my brother Paul and I to return the Yellowstone brand back to our family,” says Steve Beam. “With this bourbon, both sides of our family – the Beams and the Dants – and their distilling heritage, come together. It was one of the main reasons we partnered with Luxco, to bring Yellowstone back home and begin distilling and bottling it right here at Limestone Branch.”

Pick up a bourbon rich in both history and taste today!

Aroma of figs, chocolate and caramel corn, and leads to a bold palate filled with rhubarb vanilla, oak and freshly-baked pie crust. The finish is rich, with hints of raspberries and maple, and incredibly smooth.