Size750mL Proof80 (40% ABV)
Double distilled in a pot still from 100% Golden Promise malted barley, this whiskey is aged in ex-bourbon casks before being finished in port casks. It's a big, bold, and bright 80-proof expression. 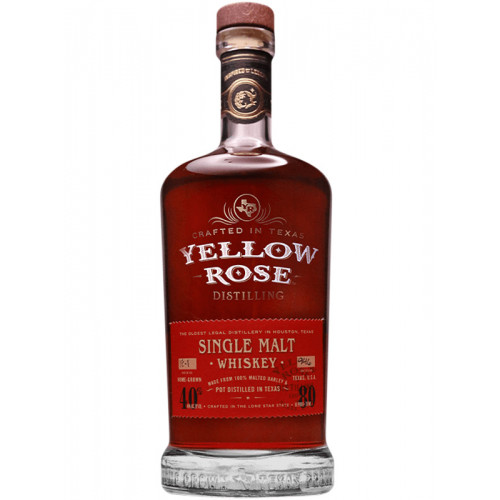 Their first 3 expressions ― the Outlaw Bourbon Whiskey, Rye Whiskey, and Premium American Whiskey ― were soon followed by others such as the Yellow Rose Single Malt Whiskey. Made with 100% Golden Promise malted barley, the 80-proof expression is double-distilled in a pot still. After its initial maturation period in ex-bourbon casks, it is finished in port barrels, resulting in a big, bold, and bright spirit with notes of dried fruit, nuts, vanilla, and spice.

It's a big and bold yet bright whiskey with a complex nose of dried fruit, spice, nuts, and hints of vanilla. On the rich palate, you'll find dried fruit and spice, culminating in a long finish with hints of coffee and cinnamon.