Learn more
Size750mL Proof86 (43% ABV) *Please note that the ABV of this bottle may vary
Based on Yellow Rose bourbon, the first release in the Premium Collection takes the bourbon for a round of finishing in port casks. After 3 to 5 months, the whiskey is bottled at 86 proof. Only 6,000 bottles of this unique expression were released.
Notify me when this product is back in stock. 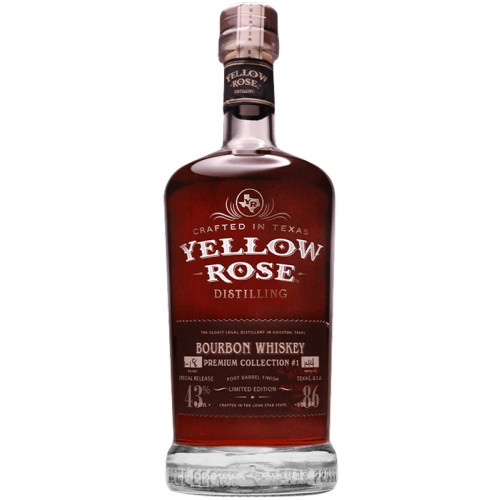 Their first 3 expressions ― the Outlaw Bourbon Whiskey, Rye Whiskey, and Premium American Whiskey ― were soon followed by others such as the Yellow Rose Premium Collection #1 Bourbon Whiskey. The first release in the Premium Collection is based on their finished bourbon whiskey. The bourbon gets finished in port casks for up to 5 months before being bottled at 86 proof, resulting in a tich and unique expression that is limited to 6,000 bottles.

Get your bottle of this limited-edition whiskey today!

The nose is sweet with inviting caramel, raisin, toffee, and cinnamon aromas. On the palate, you'll find gentle cinnamon, vanilla, hints of spice, and mint. The finish is long with a touch of dark chocolate, caramelized fruit, and hints of cherry.