Learn more
Size1500mL Proof90.4 (45.2% ABV) each *Please note that the ABV of this bottle may vary
Aged for a minimum of nine years, these single malts represent the eighth expression in the Master's Collection series.
Notify me when this product is back in stock. 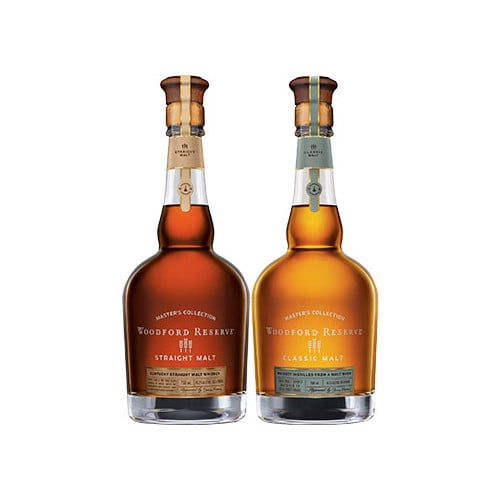 Woodford Reserve Double Malt Selections represents the eighth expression in the Master's Collection series. The release includes two whiskies: Woodford Reserve Classic Malt and Woodford Reserve Straight Malt Whiskey. "Our legal department would not let us call it "˜single malt' because it's not made in Ireland or Scotland,"Morris says. Each whiskey is made exclusively from malted barley and then triple distilled through traditional, copper-pot stills. Following distillation, Woodford Reserve Classic Malt is aged for nine years in casks that were formerly used to mature bourbon. These types of casks are traditionally used to mature Scotch, and contribute notes of buttered bread, strawberries and vanilla to the whisky. In addition, these casks give the whiskey a long, malty finish.

Woodford Reserve Straight Malt Whiskey is aged for nine years in casks composed of new, American oak. These types of casks are traditionally used to mature American whiskies such as bourbon or rye. As a result, they contribute more tannins to the whiskey, and give the whiskey an aroma of oats, rich oak and caramel. The aroma gives way to notes of spicy cinnamon and cloves on the palate, which are balanced by hints of citrus, bananas and pears. The finish is long and warm, with a touch of sweetness. Woodford Reserve Classic Malt and Woodford Reserve Straight Malt are limited edition products, and we have only a select number of sets available. Pick up a bottle of each today!