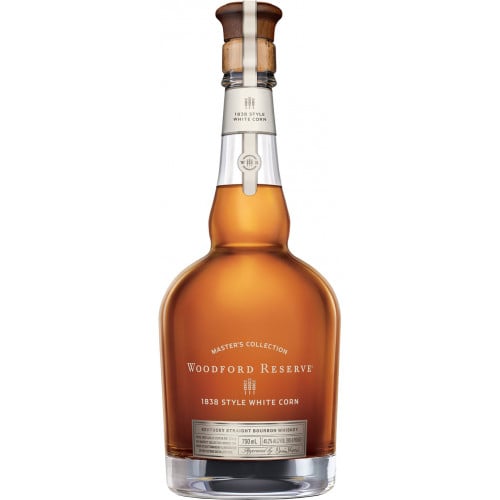 Woodford Reserve Distillery was founded in 1838 by Reverend Elijah Craig and is the oldest Kentucky bourbon distillery still in
Woodford Reserve Master’s Collection 1838 Style White Corn Whiskey is the tenth and latest release in Woodford’s esteemed Master’s Collection series. The whiskey, which was personally developed by Morris, pays tribute to early distillery pioneers Oscar Pepper and James Crow, who used white corn in their mashbills throughout the 1830s, 1840s and 1850s. Compared to traditional yellow corn, the use of white corn lends the whiskey a more mellow, nuanced flavor, which is especially adept at enhancing the flavor of secondary grains, including rye and malt.

As a result, Woodford Reserve Master’s Collection 1838 Style White Corn Whiskey has an aroma of tupelo honey, chopped nuts, apple candy and sugar cookies, which leads to a palate filled with vanilla, clove, cedar, lemon custard and shortbread. The finish is delicate and memorable, with hints of pepper, oak and light smoke rounding out this complete whiskey.

“This Master's Collection release has, in a way, allowed us to go back in time and create a new bourbon by drawing upon materials from our distillery's historic past,” says Morris. “Focusing on white corn and honoring the landmark work of Pepper and Crow, we worked to produce an expression that we hope they would approve of.”

Woodford Reserve Master’s Collection 1838 Style White Corn Whiskey is a brand-new, limited edition whiskey, and we have only a select number of bottles available. Pick one up today!

Aroma of tupelo honey, chopped nuts, apple candy and sugar cookies, which leads to a palate filled with vanilla, clove, cedar, lemon custard and shortbread. The finish is delicate and memorable, with hints of pepper, oak and light smoke rounding out this complete whiskey.