Be the first to review this product
This commemorative Woodford Reserve 2019 Kentucky Derby Mint Julep gift set is in honor of the 145th Derby. A perfect toast to horse-racing and bourbon.
Add to Wish List
Notify me when this product is back in stock.

As the official bourbon of the Kentucky Derby, Woodford Reserve is “comprised of more than 200 detectable flavor notes, from bold grain and wood, to sweet aromatics, spice, and fruit & floral notes.” This Woodford Reserve 2019 Kentucky Derby Mint Julep gift set commemorates the 145th Derby. Comes with a copper, Mint Julep cup, for that perfect
toast to horse-racing and bourbon whiskey. Cheers!

Pick up a bottle of this iconic bourbon today!

The nose is heavy with rich dried fruit, hints of mint and oranges covered with a dusting of cocoa. Faint vanilla and tobacco spice. The palate is rich, chewy, well-rounded and smooth, with complex citrus, cinnamon and cocoa. Toffee, caramel, chocolate and spice notes abound. The finish is silky smooth, almost creamy at first with a long, warm satisfying tail. 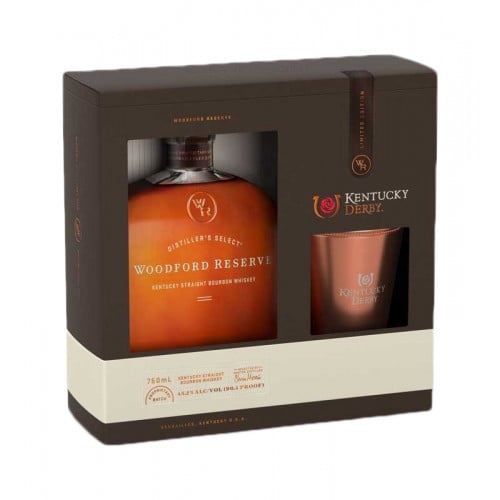