Size1L Proof90.4 (45.2% ABV)
With this 1L-bottle Woodford Reserve ― official sponsor of The Kentucky Derby ― commemorates "The Most Exciting Two Minutes in Sports". This limited-edition collectors release features the artwork of former Atlanta Braves baseball player Richard Sullivan.
Notify me when this product is back in stock. 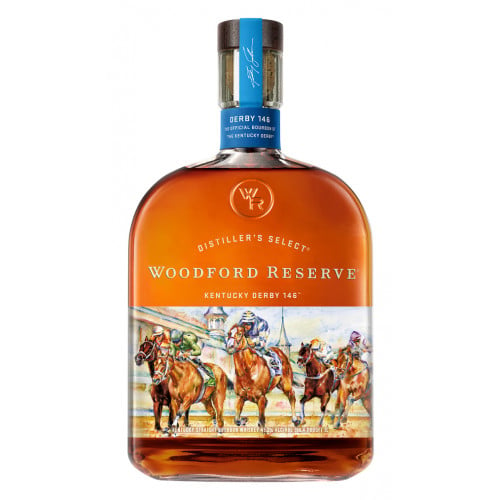 The Woodford Reserve Distillery sits on what was once an old Distillery founded by Elijah and his son, Oscar Pepper, in the 1800s. Years later, under the stewardship of Oscar and Master Distiller James Crow, their distillery reformed and modernized the process of producing whiskey in the United States — the distillery revolutionized the concepts of sour mash and yeast propagation.

Today the distillery is among Kentucky's oldest and smallest bourbon distilleries. Nestled in the heart of the Commonwealth's thoroughbred country, it's the only place you'll find bourbon and horses maturing side by side. It's also one of a handful of spirits companies in the world to own its own cooperage and craft its own barrels, allowing for ultimate precision when creating exact toast and char specifications.

Woodford Reserve’s Distillery houses an impressive 500-foot-long gravity-fed barrel run, along with their iconic copper pot stills, and 100-year-old cypress wood fermenters. Their facility also has one of the only heat cycled barrelhouses in the world. An impressive mechanism that gives Woodford Reserve its color and signature flavor. Produced under the Brown-Forman Corporation, Woodford Reserve Bourbons are premium spirits crafted in small batches and aged in new char oak barrels. This artisanal process allows them to "craft using all five sources of bourbon flavor, giving it its distinct taste and crisp, clean finish."

Woodford Reserve Kentucky Derby 146 Limited Edition Bourbon Whiskey is the official bottle that honors The Run of the Roses, The Most Exciting Two Minutes in Sports ― The Kentucky Derby annual horse race which takes place at Churchill Downs in Louisville, Kentucky. The one-liter bottle is adorned with a label that features the artwork of former Atlanta Braves baseball player Richard Sullivan. "There is a poetic beauty in this year's bottle because Richard Sullivan, the human athlete, is celebrating the equine athlete," says Master Distiller Chris Morris. You can expect a rich nose with dried fruit, orange zest, and hints of cocoa, vanilla, and tobacco. The smooth and complex flavor profile consists of citrus, spice, cocoa, toffee, and caramel and finishes super smooth and long, almost creamy.

You can expect a rich nose with dried fruit, orange zest, and hints of cocoa, vanilla, and tobacco. The smooth and complex flavor profile consists of citrus, spice, cocoa, toffee, and caramel and finishes super smooth and long, almost creamy.