Size750mL Proof90.4 (45.2% ABV)
This special 20th anniversary edition bottling of Woodford Reserve Bourbon commemorates the running of the 145th Kentucky Derby, where Country House took home the crown.
Notify me when this product is back in stock. 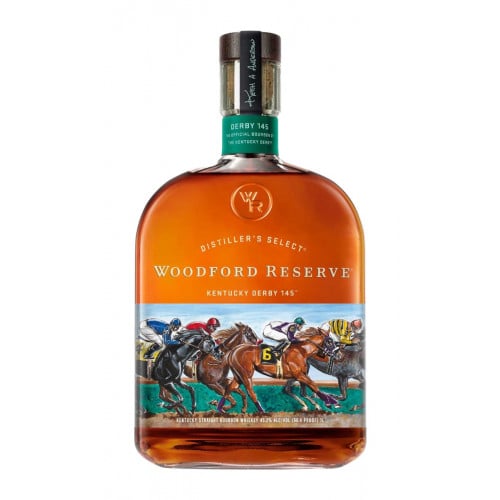 Nestled amidst the rolling hills of bluegrass and thoroughbred farms sits one of Kentucky’s oldest and smallest distilleries. The iconic Woodford Reserve Distillery sits on the grounds of a National historic landmark. It is Kentucky’s oldest distilling site where the legendary Elijah Pepper began crafting whiskey in 1812, beginning a dynastic legacy in Kentucky Bourbon.

This limited-edition 2019 Woodford Reserve Derby bottle features the colorful artwork of Keith Anderson, an employee of the Brown-Forman’s Bourbon Street Cafe. As is the official bourbon of The Kentucky Derby this is the 20th annual release in the long-standing artistic series. Commemorating the running of the 145th Kentucky Derby the bottle features thoroughbreds racing across the decanter.

Clean, brilliant honey amber complexion, with notes of rich dried fruit, hints of mint and oranges covered with a dusting of cocoa, faint vanilla and tobacco spice on the nose. The palate is rich, chewy, rounded and smooth, with complex citrus, cinnamon and cocoa. Toffee, caramel, chocolate and spice notes abound. The finish is silky smooth, almost creamy at first with a long, warm satisfying tail.