Size750mL Proof123.6 (61.8% ABV)
Woodford Reserve Batch Proof bourbon is a straight bourbon whiskey from a select group of barrels.
Notify me when this product is back in stock. 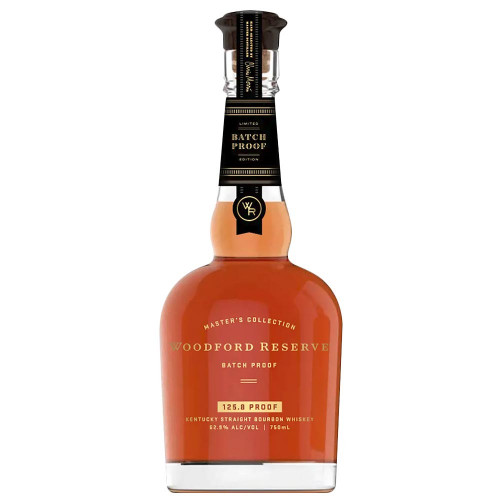 It was on this same sacred soil that years later, Master Distiller James Christopher Crow developed his whiskey-making methods, alongside Oscar Pepper, "which today have become common practice, including the implementation of sour mash into fermentation." Revolutionizing concepts of sour mash and yeast propagation, and modernizing the process of whiskey production in the US.

Produced under the Brown-Forman Corporation, Woodford Reserve Bourbons are premium spirits crafted in small batches and aged in new char oak barrels. This artisanal process allows them to "craft using all five sources of bourbon flavor, giving it its distinct taste and crisp, clean finish."

A complex medley of wood spice notes including smoked cedar, dark chocolate, pineal, and vanilla are balanced with hints of orange zest, grilled pineapple and cherry fruit. Sweetened with a trace of marzipan, peppermint, and malt. Dark chocolate drizzled over toasted almonds, hazelnuts and malty shortbread spiced with hints of leather, cedar, and nutmeg on the palate. The finish delivers notes of rich aged leather spice and dark chocolate lead to a crisp dry finish.