Size1L Proof90.4 (45.2% ABV)
This limited edition bottle of bourbon commemorates the 140th anniversary of the Kentucky Derby.
Notify me when this product is back in stock. 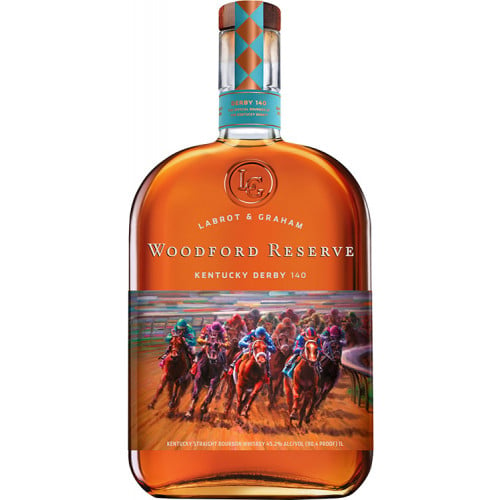 Founded in 1838 by Elijah Craig, Woodford Reserve Distillery is the oldest Kentucky bourbon distillery still in operation today. Under the stewardship of Craig and his oldest son, Oscar Pepper, the distillery is credited with improving and modernizing the process of producing whiskey in the United States — it introduced the concepts of sour mashing, yeast propagation and copper pot distillation.

Nearly two centuries later, Chris Morris — Woodford Reserve's seventh master distiller — pays homage to Pepper and Crow with Woodford Reserve 2014 Kentucky Derby Limited Edition Bourbon Whiskey. Morris, who began working at Woodford Reserve Distillery when he was just 16 years old, is one of the foremost experts in the production and maturation of bourbon and samples up to 180 unique whiskies each day. "It's about pursuing flavor through modernizing old practices," says the 55 year-old master distiller.

Woodford Reserve 2014 Kentucky Derby Limited Edition Bourbon Whiskey is a traditional bottling of Woodford Reserve Bourbon, and features the artwork of Louisville artist David O. Schuster. Schuster's image on the bottle is entitled "The 4th Turn" and captures the horses and jockeys in their multi-colored silks racing down the last turn and final stretch of the race. "David O. Schuster has been a fixture of the city's art community for over a decade, making him the ideal selection as the 140th Kentucky Derby bottle artist," said Jason Kempf, Woodford Reserve's Brand Director. "Schuster has a true ability to craft beauty and wonder from his equine subjects, and Woodford Reserve is honored to showcase his work on this year's commemorative Derby bottle." In addition, the neck band features a diamond pattern of light blue and copper, as well as the date of the 2014 Kentucky Derby.

Only a handful of these bottles are available. Pick one up today!