Learn more
Size750mL Proof106 (53% ABV) *Please note that the ABV of this bottle may vary
The Wolves team tested over 50 different barrels and made 19 different blends before landing on this dangerously smooth, highly unique 106 proof expression.
Notify me when this product is back in stock. 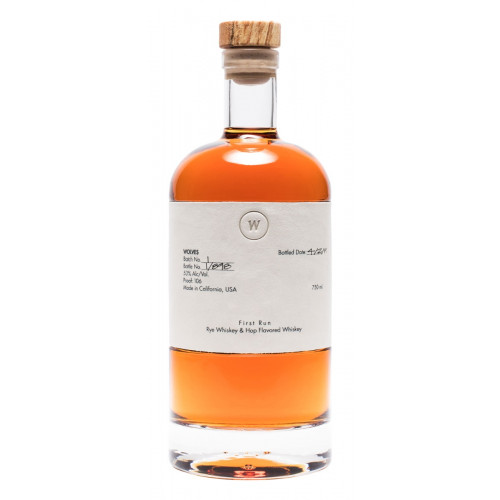 This truly incredibly unique whiskey was discovered in woods and vines of California’s wine country. Wolves is a special California whiskey made by an authentic collective of creatives James Bond and Jon Buscemi. Authenticity has been their North Star, unassailable quality their passion.

This truly unique whiskey was discovered nestled between the woods and vines of California’s wine country. Here, 13th generation Master Distiller Marko Karakasevic (of Charbay fame) handcrafts his bespoke whiskey with the utmost meticulous care, expertise, and attention, using a rare copper alambic charentais pot still - one of only five in existence.

The 10-day process with an alambic still is far less efficient, but the result impeccable. Karakasevic personally decides where each cut is made and personally selects “the heart of hearts” for double distillation. It's an intense and subtle alchemy practiced by a generational artisan.

The Wolves team tested more than 50 different barrels and made 19 different blends before deciding on this 106 proof expression titled “First Run.”

This whiskey is a special blend comprised of matured whiskeys distilled from craft Stout beer, Pilsner beer, and Rye whiskey, sourced from a separate distillery. The Stout whiskey in the blend was aged in French Oak for 8 years, while the Pilsner whiskey was aged in New American Oak, Char 3, for 5 years.

The Rye was hand-selected for the spice it imparts onto the spirit to balance out the smooth craft beer distillates. The exquisite packaging is also what makes this expression quite special. The full blend is then lightly filtered with the mineral-rich water of Sonoma County, hand poured into heavy French-cut glass, and wrapped Italian Sheepskin leather.

You can expect slight sweet notes of toasted vanilla, citrus, dark chocolate, nutmeg and tobacco followed by an unabashedly smooth finish, which at 106 proof is quite impressive. Only 898 bottles were made.

Slightly sweet aromas, toasted vanilla, citrus, and warmed nutmeg notes. The palate is complex with notes of dark chocolate, citrus, tobacco, oak, baking spice and a smooth creamy mouthfeel. The finish is compellingly smooth at 106 proof, with the Rye having the final word in the upper chest.