Size750mL Proof90 (45% ABV)
Made from a unique blend of Canadian rye, rye malt and barley malt, this whisky was named the Canadian Whisky of the Year by Whisky Advocate.
Notify me when this product is back in stock. 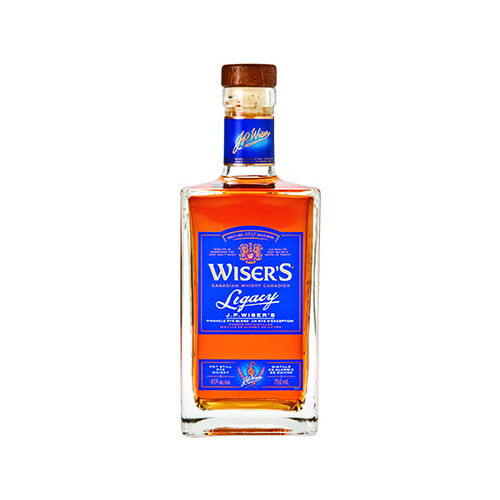 In the 19th century, John Philip Wiser emigrated from New York to Ontario, Canada. His maternal grandparents had purchased a distillery in Ontario and in 1857, Wiser became the distillery's manager. Within five years, Wiser had purchased the distillery from his grandparents and eventually, transformed it into of the largest and most prestigious distilleries in the country. Today, Wiser's Whisky continues to be handmade using the same traditional methods envisioned by J.P Wiser over a century ago.

Wiser's Legacy Whisky is crafted by Don Livermore, Wiser's Master Blender. Livermore spent 15 years as a blender before completing his Ph.D. in brewing and distilling in Edinburgh at the Heriot-Watt University (he studied the effects of wood on aging whisky for his doctorate). Wiser's Legacy is made from a blend of Canadian rye, rye malt and barley malt, which are milled and mashed separately before being distilled and matured in oak casks.

As a result of its unique mashbill, the whisky has a creamy mouthfeel, with notes of cinnamon, peppermint patties, ginger and spices that warm the palate. The initial flavor profile gives way to notes of butterscotch, toffee and toasted rye bread, and finishes with a smooth, spicy hint of cloves. The "rye malt imparts a unique spicy quality to the whisky,"explains Livermore, "yet provides a smooth finish on the palate."

Wiser's Legacy earned a score of 93 points from the Beverage Testing Institute, and was named the Canadian Whisky of the Year in December 2013 by Whisky Advocate.

Creamy mouthfeel, with notes of cinnamon, peppermint patties, ginger and spices that warm the palate. The initial flavor profile gives way to notes of butterscotch, toffee and toasted rye bread, and finishes with a smooth, spicy hint of cloves.