Learn more
Size750mL Proof127.2 (63.6% ABV) *Please note that the ABV of this bottle may vary
This big, bold, and rare single barrel bourbon has spent 6 years in its white oak barrel no. 6601 before being bottled at 127.2 proof.
Notify me when this product is back in stock. 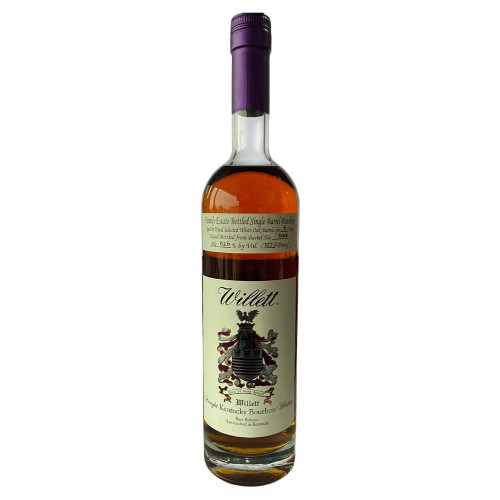 Today, Even Kulsveen, Thompson Willett's son-in-law and the owner of Willett Distilling Company, continues to shepherd the family legacy forward, releasing Kentucky bourbon and rye whiskeys. In 2012, the renovated distillery opened its doors and the pot still became operational for the first time. The Willett Family Estate 6 Year Old is produced with a wheated bourbon mash bill. The single barrel no. 6601 has spent its 6 years in hand-selected American white oak before being bottled at 127.2 proof. You can expect a big, bold, complex, and pleasantly sweet whiskey with vanilla, caramel, and spice notes.

Get your bottle of this rare bourbon today!

For the Willett family, distilling craft whiskey is a family tradition. John David Willlett began distilling at the Moore, Willett & Frenke Distillery just outside of Louisville, Kentucky, during Reconstruction. In 1898, his son, A. Lambert Willett — who was just 15 years old at the time — began apprenticing with his father. Eventually, Lambert purchased a farm on the outskirts of Bardstown, Kentucky, and began construction of the Willett Distilling Company in the spring of 1935. While Willett Distilling Company eventually changed its name to Kentucky Bourbon Distillers, the family tradition lives on. Even Kulsveen, the owner of KBD, is Willett's son-in-law.
Explore all Willett bottles >>

It's a big and bold bourbon with vanilla, caramel, spice, and leather aromas. The pleasantly sweet palate has honey, vanilla, orange zest, and a touch of black tea. The long finish has lingering baking spice and orange notes with a hint of mint.