Size750mL Proof119 (59.5% ABV). Proof may vary based on barrel.
Aged for eight years, this single barrel rye whiskey was bottled at cask strength.
Notify me when this product is back in stock. 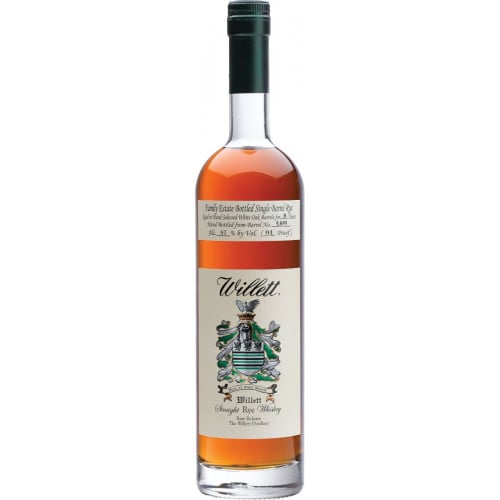 Aged for eight years and bottled at cask strength, this rye whiskey has a dark copper color, along with a strong, spicy aroma. Hints of brown sugar, dark chocolate and coffee beans subtly complement bold notes of rye, buttered biscuits and caramel. The finish is lush and intense, with touches of cloves, ginger and a hint of smoke.

The Willett family legacy lives on in Willett Straight Rye Whiskey. Now, you can be part of that legacy too!

For the Willett family, distilling craft whiskey is a family tradition. John David Willlett began distilling at the Moore, Willett & Frenke Distillery just outside of Louisville, Kentucky, during Reconstruction. In 1898, his son, A. Lambert Willett — who was just 15 years old at the time — began apprenticing with his father. Eventually, Lambert purchased a farm on the outskirts of Bardstown, Kentucky, and began construction of the Willett Distilling Company in the spring of 1935. While Willett Distilling Company eventually changed its name to Kentucky Bourbon Distillers, the family tradition lives on. Even Kulsveen, the owner of KBD, is Willett's son-in-law.
Explore all Willett bottles >>

Dark copper color, along with a strong, spicy aroma. Hints of brown sugar, dark chocolate and coffee beans subtly complement bold notes of rye, buttered biscuits and caramel. Finish is lush and intense, with touches of cloves, ginger and a hint of smoke