Size750mL Proof125.7 (62.85% ABV)
Distilled in 2013 from Minnesota rye, Kentucky corn, and North Dakota malted barley, this award-winning rye whiskey spent more than 6 years in new American oak casks before being bottled uncut and unfiltered at 125.7 proof.
Notify me when this product is back in stock. 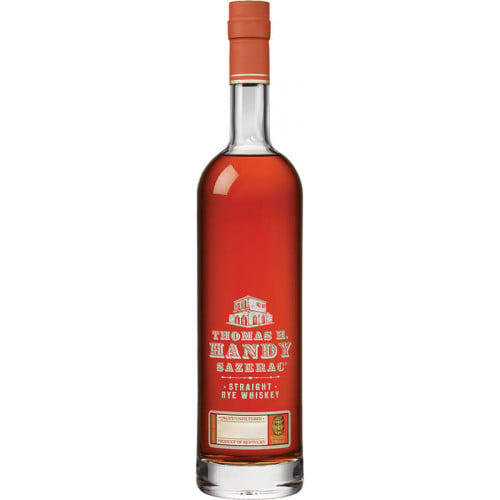 Buffalo Trace's revered Antique Collection is home to several ultra-premium whiskey expressions that have garnered countless awards over the years. Thomas Handy Sazerac is named after a New Orleans bartender who was the first to use rye whiskey in a Sazerac cocktail. Always bottled directly from the barrel, it's a series of bold and rich whiskey that's always uncut and unfiltered. The 2019 release of the Thomas Handy Sazerac was distilled in 2013 from Minnesota rye, Kentucky corn, and North Dakota malted barley. It then spent more than 6 years in #4 char new American oak casks in warehouses N, M, and K, before being bottled uncut and without filtration at 125.7 proof. The expression has received The Chairman's Trophy ― 99 points at The Ultimate Spirits Challenge in the year of its release.

Get your bottle of this award-winning rye whiskey today!

The nose is floral and sweet with crème brulee, raisin, and hints of spearmint. The palate is creamy and fruity with butterscotch, cherry, vanilla, and rye spice. The finish is long and nuanced with lingering baking spice, dark sugar, chocolate, and cedar notes.