$887.99
Caskers Rewards members earn up to 44 store points back when buying this bottle.

Size750mL Proof104 (52% ABV)
In celebration of Wild Turkey Master Distiller Eddie Russell’s 35th year in the industry. This beautiful bourbon is a hand-selected batch of special, rare barrels, aged between 10 and 20 years, blended by the man of the hour himself.
Notify me when this product is back in stock.

Caskers Rewards Caskers Rewards members earn up to 44 store points back when buying this bottle. Learn more
Out of stock
Skip to the end of the images gallery 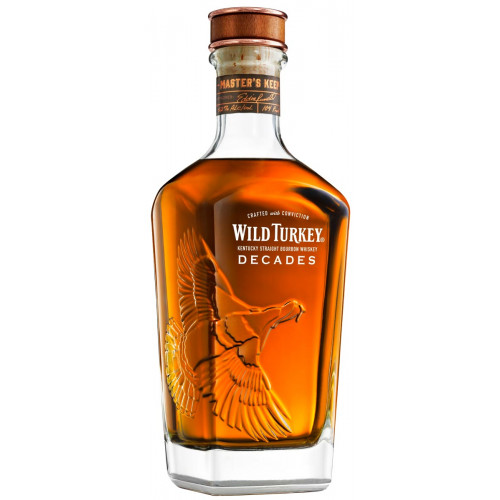 Wild Turkey Master’s Keep Decades, is an ode to Wild Turkey Master Distiller Eddie Russell, who is celebrating his 35th year in the spirits industry. Russel first got his start in the business in June 1981 carrying the torch of his father, legendary Master Distiller Jimmy Russell. With a combined 100 years of experience under their belts, the dynamic duo continues to their work as the industry’s only active father and son master distiller duo.

“For Master’s Keep Decades, I went all out and used some of the rarest and most precious barrels in our stocks,” said Eddie Russell. “The final product is a whiskey with the finesse and deep character of older Bourbon, anchored by the bold, balanced, and vibrant backbone of younger bourbon. I have to say, this is a whiskey I truly love and I’ll be holding a few bottles back for my personal collection.”

This hand-selected batch of special, rare barrels, aged between 10 and 20 years, represents the very best of two decades of bourbon making. Masterfully blended by Russell himself, the harmonious mixture yields an extraordinarily enjoyable whiskey, “with the finesse and deep character of older bourbon, anchored by the bold, balanced, and vibrant backbone of younger bourbon” (producer).

Pick up a bottle of this extraordinary bourbon today!

On the nose is an elegant balance of leather, tobacco, cedar, toasted marshmallow, a hint of grassy rye, and white pepper aromas. The palate is just as refined with nuanced notes of smoky oak, stewed fruits like apple, peach and cherry. Not overpoweringly sweet, with a silky mouthfeel, and a smooth finish.