Learn more
Size750mL Proof91 (45.5% ABV) *Please note that the ABV of this bottle may vary
Bottled at 91 proof, this limited-edition whiskey was made from a marriage of Wild Turkey Bourbon and Wild Turkey Rye.
Notify me when this product is back in stock. 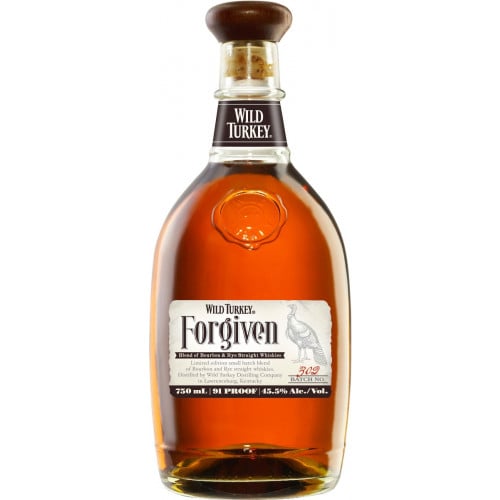 Wild Turkey Forgiven Whiskey was created by accident when a distillery crew-member mistakenly mingled together a perfectly-matured, six-year old Wild Turkey Bourbon (78%) with a high-proof, four-year old Wild Turkey Rye (22%) (each had matured in American oak casks with a #4 char). After the mistake was made, Eddie Russell tasted the blend and quickly concluded that the exceptional whiskey should be brought to market, giving birth to Wild Turkey Forgiven. "I was mad when I first discovered our crew's mistake," says Russell, "but once I tasted it, all was Forgiven."

Wild Turkey Forgiven has a bold and spicy aroma, with notes of cloves, oak, cinnamon and rye bread. "At Wild Turkey, we like the spicy note the rye gives you," says Russell. The aroma gives way to a more mellow flavor profile, with notes of caramel, creamy vanilla and toffee that lead to a finish accented by touches of pepper and whipped cream.

Wild Turkey Forgiven is proof that not all mistakes are created equal, and is available only in limited quantities. Pick up a bottle today!

Spicy aroma, with notes of cloves, oak, cinnamon and rye bread. More mellow flavor profile, with notes of caramel, creamy vanilla and toffee that lead to a finish accented by touches of pepper and whipped cream.