Size750mL Proof71 (35.5% ABV)
Crafted by Master Distiller Jimmy Russell three decades ago, this original honey whiskey earned 91 points from Wine Enthusiast.
Notify me when this product is back in stock. 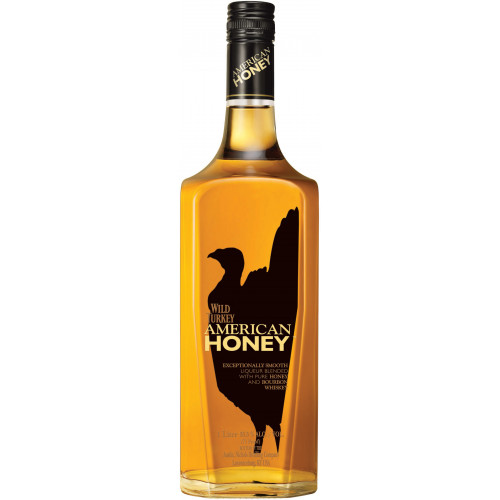 Following the end of the American Civil War, the Ripy Brothers returned to their native state of Kentucky and together, opened a distillery on the slopes of a hill in Lawrenceburg. The distillery operated continuously for nearly fifty years until the 18th Amendment, which prohibited the sale of alcohol in the United States, was ratified. Following the end of Prohibition, the Ripy Brothers Distillery was reopened and a distillery executive named Thomas McCarthy took samples of maturing whiskey from the distillery on a turkey hunt with a group of friends. The next year, his friends asked him to bring "some of that wild turkey whiskey"on their next hunt, giving birth to the distillery's new name.

Blended with real, pure honey, Wild Turkey American Honey Whiskey was originally invented by Master Distiller Jimmy Russell three decades ago. Today, it stands the test of time with its pleasant aromas of citrus and vanilla, as well as its thick, honey-coated palate and soft finish filled with butter and caramel.

Pleasant aromas of citrus and vanilla. Thick, honey-coated palate leads to a soft finish filled with butter and caramel.