Size750mL Proof91 (45.5% ABV)
A rarely available Wild Turkey bourbon. Aged for 13 years and bottled at 91 proof instead of the Wild Turkey's typical 101 proof, this is a well-balanced and complex bourbon.
Notify me when this product is back in stock. 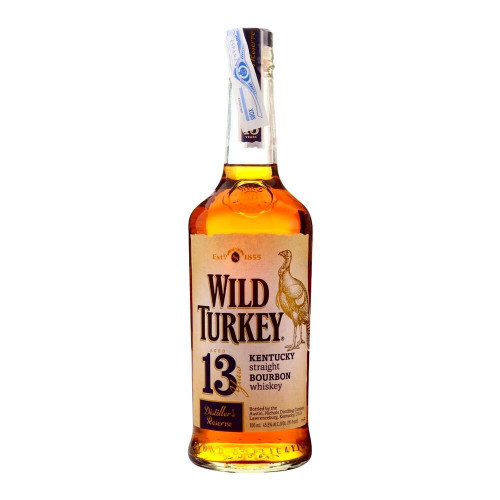 A rarely available bottle on the U.S. market, Wild Turkey 13 Year Old Distiller's Reserve Bourbon Whiskey stands out in the Wild Turkey range. Aged for a non-standard of 13 years and bottled at 91 proof instead of the classic 101 proof that's typical for Wild Turkey, this is an exceptional bourbon of a beautiful copper hue and a complex palate of toasted caramel, vanilla, charred oak, leather, baking spice and a hint of citrus. The finish is pleasant and balanced as well with flavors of oak, clove and vanilla spice lingering in the background. A splendid sipper that should be savored on its own.

Get this rarely available bottle from Wild Turkey today!

Copper hue. The nose is sweet with vanilla spice, caramel, nutmeg and cinnamon. The palate boasts flavors of toasted caramel, sweet charred oak, leather, vanilla, pepper and a hint of citrus. The finish is medium long, well-balanced and pleasant.