Size750mL Proof101 (50.5% ABV)
One of the most quintessential rye whiskeys, Wild Turkey 101 Rye is finally back. A bold and big expression, it brings signature flavors of vanilla and spice along with the signature bold rye taste.
Notify me when this product is back in stock. 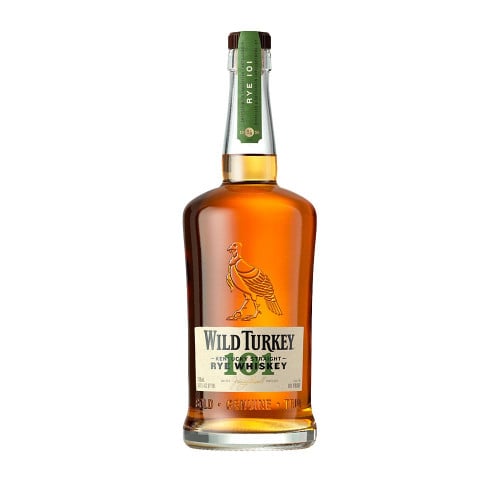 One of the most popular quintessential rye whiskeys ever to be made, Wild Turkey 101 Rye has finally returned after being discontinued and replaced with a lower 81-proof version in 2012. Bottled at a higher proof, it brings bigger flavors of vanilla and spice balanced by the signature bold rye taste. Wild Turkey 101 Rye has no problem standing up to any mixer but it's complex and delicate enough to be sipped on its own. A true classic and a worthy ode to America's first distilled spirit.

Following the end of the American Civil War, the Ripy Brothers returned to their native state of Kentucky and together, opened a distillery on the slopes of a hill in Lawrenceburg. The distillery operated continuously for nearly fifty years until the 18th Amendment, which prohibited the sale of alcohol in the United States, was ratified. Following the end of Prohibition, the Ripy Brothers Distillery was reopened and a distillery executive named Thomas McCarthy took samples of maturing whiskey from the distillery on a turkey hunt with a group of friends. The next year, his friends asked him to bring "some of that wild turkey whiskey"on their next hunt, giving birth to the distillery's new name.

Caramel hue. The nose brings pleasant aromas of caramel, vanilla, dark fruit, and spice with a touch of oak. The palate continues with flavors of caramel and more complex spice, giving way to toffee and wood. The finish is long, sweet, and spicy.